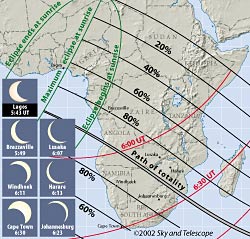 As seen from most parts of both Africa and Australia (below), the Moon will take a pronounced 'bite' out of the Sun on December 4th. Curves are labeled with the Universal Time of greatest coverage and the eclipse magnitude (the percentage of the Sun's diameter covered). The insets show the Sun's appearance to an observer who stands and faces the Sun with a safe solar filter. A black bar surrounding a city name means maximum obscuration occurs at sunrise or sunset.

On Wednesday, December 4th, the Moon passes more or less directly in front of the Sun for observers situated almost anywhere in the vast continents of Africa and Australia. Unless you've booked a tour or planned your own expedition to the narrow path of totality, you're likely to see a partial eclipse of the Sun. Our maps show the land regions involved and, for many key cities, the Sun’s appearance when maximally covered by the Moon. (For details of what to expect within the path of totality, refer to the extensive article by Fred Espenak and Jay Anderson in last June’s Sky & Telescope, page 32.)

Keep in mind that the Sun is no less dangerous to view during a partial eclipse than at any other time — the uneclipsed part of the solar disk is just as dazzling. For naked-eye viewing, a No. 14 welder’s glass or a filter designed for solar observations with a telescope may be held up to the eye. To learn more about how to safely observe the Sun, check the articles found in "The Sun" section of this Web site — included there is a list of companies producing safe solar filers. Never use ordinary camera filters or dark glasses, which might transmit harmful infrared light even though the Sun’s glare may appear sufficiently dimmed. 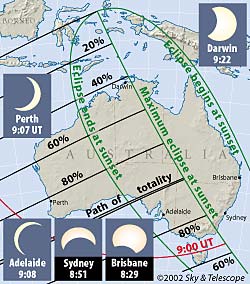 As seen from most parts of both Africa and Australia, the Moon will take a pronounced 'bite' out of the Sun on December 4th. Curves are labeled with the Universal Time of greatest coverage and the eclipse magnitude (the percentage of the Sun's diameter covered). The insets show the Sun's appearance to an observer who stands and faces the Sun with a safe solar filter.

But this December’s eclipse is tailor-made for another safe viewing method — that of letting the Sun’s rays pass through a tiny hole and fall on a smooth viewing surface many feet away. (Look at the projected spot of light; don’t look through the hole.) This technique, borrowed from the pinhole camera, produces an inverted image of the solar crescent that is roughly 1/100 as wide as the projection path is long.

"I have always admired the large pin-hole images of the setting Sun cast by my oak trees on the neighbor’s house," writes Daniel J. Burns. "I often thought how great it would be to have a sunset eclipse revealed by these images." Burns got his chance last June 10th, for he lives in Los Altos, California, where more than 70 percent of the Sun was covered by the Moon that day.

December’s eclipse offers similar projection opportunities, for the event takes place soon after sunrise in Africa and shortly before sunset in Australia. In either case, the low Sun will permit exceptionally long projection paths for light rays passing through the branches of fully leafed baobab and gum trees.

Even if you're not heading down under to see this eclipse, you may be able to catch it live on the Web. Several Web sites have broadcast previous solar eclipses, but as of mid-November only Australia's Commonwealth Scientific and Industrial Research Organisation (CSIRO) has firm plans for a broadcast.