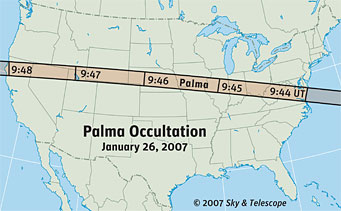 You'd have to be old enough to remember the final episode of M*A*S*H to have seen a better asteroid occultation than the one occurring this coming Friday morning when 372 Palma passes in front of a 6th-magnitude star in Lynx. The event will be visible along a track 120 miles (190 kilometers) wide extending from the Delmarva Peninsula in the East to northern California in the West, crossing Cincinnati, Indianapolis, Omaha, and Salt Lake City. If clear skies prevail, this could be the most widely observed asteroid occultation in history.

The map here shows the predicted path within which 32 Lyncis will be blotted from view for up to 14 seconds. Universal times are given and correspond to 4:44 a.m. EST and 1:48 a.m. PST. There will be plenty of time to locate the target star, since it will be visible as soon as darkness falls for observers anyplace within the occultation track. 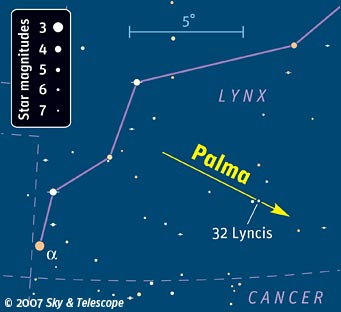 Although the star is easily seen in binoculars, the 10.5-magnitude asteroid will require a small telescope. Because of this, observers with binoculars will see the star simply vanish during the occultation, while those with small telescopes will see a brightness drop of approximately 4 magnitudes as the combined light from the unresolved pair is temporarily replaced with just the asteroid's light.

The International Occultation Timing Association (IOTA) is making special preparations for this event. Observers seeking more information, and especially those interested in contributing to the science that can be gleaned from the occultation should visit http://iota.jhuapl.edu/mp372.htm.

It was 1983 when an asteroid occultation this favorable was last seen in the US. During that event 40 observers spread between Alabama and Virginia witnessed asteroid 51 Nemausa pass in front of 5.9-magnitude 14 Piscium.