How Many Stars Can You See? 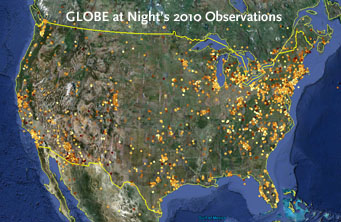 Thousands of North Americans contributed night-sky observations to GLOBE at Night's 2010 campaign. To see a zoomable version of all the reports, download this file and display it using Google Earth.

With half of the world's population now living in cities, many urban dwellers have never experienced the wonderment of pristinely dark skies — and maybe they never will. This loss, caused by light pollution, is a concern on many fronts besides as well as our ability to view the stars: safety, energy conservation, cost, health, and effects on wildlife.

Even though light pollution is a serious and growing global concern, it is one of the easiest environmental problems you can address on local levels. Participation in the international star-hunting campaign, GLOBE at Night, helps to address the light pollution issue locally as well as globally.

It's easy and fun to do. First, you match the appearance of the constellation Orion (first campaign) or Leo or Crux (second campaign) with simple star maps of progressively fainter stars. Then submit your measurements, including the date, time, and location of your comparison. After all the campaign's observations are submitted, we'll release a map of light-pollution levels worldwide. Over the past five years, volunteers from more than 100 nations have contributed 52,000 measurements — a third of which came from last year's campaign. 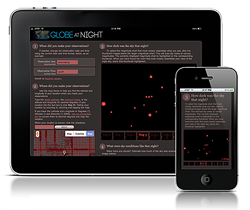 New for the 2011 campaigns is a downloadable web application for smart phones and tablets that makes entering your observation a snap.

The big news this year is that children and adults can submit their measurements in real time if they have a smart phone or tablet. To do this, you'll need our custom web application. With smart phones and tablets, the location, date and time are put in automatically. (For those of you who'll submit your observations using a home computer, the campaign's reporting page has user-friendly tools to find latitude and longitude.)

There's even a special program for kids, called the Dark Skies Rangers, that helps them explore what light pollution is, how it affects wildlife, and how to prepare for participating in the GLOBE at Night campaign.

Monitoring our environment will allow us as citizen-scientists to identify and preserve the dark sky oases in cities and locate areas where light pollution is increasing. All it takes is a few minutes during the 2011 campaign to measure sky brightness and contribute those observations on-line. Help us exceed the 17,800 observations contributed last year. Your measurements will make a world of difference!

Call for Observations of X-ray Binaries and CVs

The Chaotic Music of Variable Stars