The “comet of the century” was stuck at 16th magnitude when it hid out for the summer. Still, good prospects remain for December.

Newly discovered comets are always a bit mysterious and confounding in how they develop. That’s especially true for new comets that become active early, promising great things while they’re still far from the Sun. In these cases, predictions of future glory often fall flat. 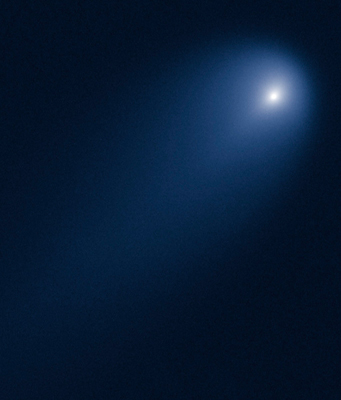 Hubble captured this view of Comet ISON on April 10, 2013, when it was slightly closer than Jupiter's orbit to the Sun.

So what can we expect from Comet ISON (C/2012), now approaching amid great expectations? It will swing close by the Sun at the end of November and climb up the dawn sky in December. Some of the media have been billing ISON as “the comet of the century.” Is there a chance that this won’t be an embarrassment?

The excitement arises from the remarkably close Sun graze that the comet will perform at its perihelion on November 28th. It will fly less than one solar diameter past the Sun’s surface, with the dusty ice of its nucleus broiling violently. Despite the unknowns, past performances by sungrazing and sun-skirting comets allow us to make a reasonable estimate of what’s in store.

A comet usually brightens and fades by an inverse power law of its distance from the Sun. (Its brightness to us also depends on its distance from Earth.) This has been true for all bright comets of the famous Kreutz sungrazing family that have survived their fiery encounters with the Sun, as well as for several others making close Sun passes. Comet ISON differs from most of these by being a dynamically “new” comet that has not experienced previous trips through the inner solar system. Such new comets often have surface deposits of low-temperature volatiles, mainly carbon dioxide and carbon monoxide, that vaporize far from the Sun and cause temporary early activity. Nevertheless ISON shares many sungrazer characteristics.

A close solar pass can disrupt and evaporate a comet’s nucleus completely. The intrinsically faintest sungrazer to survive its brush with the Sun reasonably intact was Comet Ikeya-Seki in 1965. The long-tailed sungrazers seen in 1880 and 1887 experienced total disruption of their nuclei and dissipated completely within weeks after perihelion. The latest observations of Comet ISON suggest that it’s intrinsically about as bright as those 19th-century objects, so the survival of its head much beyond November 28th is in question.

However, ISON is decidedly brighter than the recent Comet Lovejoy, which totally disrupted and, despite this or perhaps because of it, put on a spectacular long-tailed show for Southern Hemisphere observers at the end of 2011.

Extrapolating from those comets, here is the display I currently envision for Comet ISON at the close of this year.

From January through May Comet ISON brightened hardly at all, remaining stuck at magnitude 16 or 15 and falling nearly two magnitudes behind the early predictions. It became lost in twilight around the end of May and won’t be back in view until the end of August. 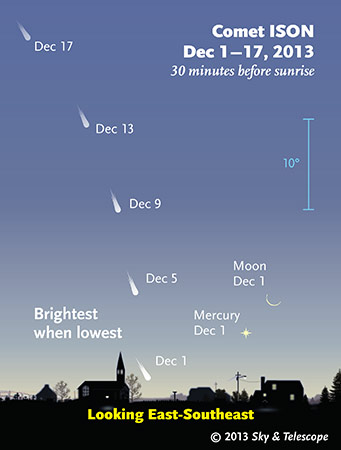 In early December 2013, Comet ISON will climb up in the eastern sky at dawn, fading after its solar swingby.

So my forecast is that Comet ISON will develop more slowly in the autumn morning sky than initially thought. It won’t reach naked-eye detectability until around the 10th of November, about three weeks before rounding the Sun. It will brighten steadily but not exceed 2nd or 3rd magnitude before disappearing into the morning twilight just a week shy of its November 28th perihelion. At that time a short, not particularly bright tail should trail the comet’s intensifying coma.

On perihelion day the head of the comet may spike very briefly to around magnitude –6, brighter than Venus. It might be seen in the daytime sky as a fuzzy point by experienced observers who use great precaution when looking for the comet close to the Sun. This grandeur will persist for only for a matter of hours, as the comet will immediately begin to fade dramatically.

As ISON re-emerges in the dawn sky a few days after perihelion, its head will have faded to about 2nd or 3rd magnitude. But by now it will sport a brilliant, quickly straightening tail perhaps 10° to 15° long. This impressive tail will grow longer morning by morning, while the comet’s head becomes ever less distinct.

The crescendo of the apparition will likely occur between December 10th and 14th, when the comet will be best seen just before dawn after the Moon sets. Although little or perhaps nothing of the head will remain, the huge tail will loom in the northeastern sky. Almost evenly illuminated over its length, this rapidly fading appendage could reach from southern Hercules to the near the handle of the Big Dipper, spanning almost a quarter of the heavens as seen under good, dark observing conditions.

So: “comet of the century”? If we’re talking only about Northern Hemisphere observers, and since the century is only 13 years old, there’s still a chance.

John Bortle has been covering comet topics for Sky & Telescope since 1967. Keep up to date with Comet ISON developments at www.skypub.com/ISON