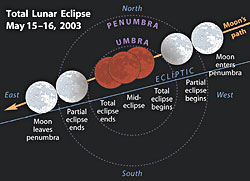 During May’s lunar eclipse, the Moon crosses fully inside the north section of the Earth’s shadow core, called the umbra. Much less noticeable are the preceding and following stages of the eclipse, when the Moon is in the shadow’s outer fringe, or penumbra.

On Thursday night, May 15–16, the full Moon will pass through the northern part of the Earth’s shadow, providing a colorful spectacle for observers throughout the Americas, Europe, and Africa. Lunar eclipses get their colorful red-orange hues from sunlight that is filtered and bent by the Earth’s atmosphere before it reaches the Moon. Skywatcher Mary Ward of Dublin, Ireland, once likened the totally eclipsed Moon to a "red-hot penny" in the star-filled sky — a description as apt today as it was for her on February 7, 1860.

For observers in South America on May 15–16, the total phase coincides with the Moon being high overhead at midnight. In western North America the eclipse will already be under way as darkness falls on May 15th, while east of the Mississippi River the entire event can be seen later in the evening. Those in Western Europe can see the eclipse’s beginning as dawn approaches, but its end will be swallowed up by the gathering glow.

More information about this eclipse (including a list of links for live web coverage of the eclipse) can be found on a special NASA/Goddard SpaceFlight Center lunar eclipse page created by Fred Espenak.

Observing and Photographing the Eclipse

So reddened and subdued was the Moon's light during the total eclipse of July 16, 2000, that Japanese astrophotographer Akira Fujii could capture our satellite among the myriads of stars in Sagittarius. Just right of center is the Teaspoon asterism, and beyond that an especially rich part of the Milky Way.

One worthwhile project for skywatchers is to estimate the Moon’s stellar magnitude at mideclipse, an excellent gauge of the sullying effect that recent volcanic eruptions, even large wildfires, may have had on our atmosphere’s transparency. During the legendary dark eclipse of December 30, 1963, Kansas amateur James Starbird almost lost sight of the eclipsed Moon, saying it was "like a nebula of the same magnitude as the Beehive cluster." Typically, however, the Moon remains brighter than any nighttime star.

People who wear thick eyeglasses can simply take them off, turning the Moon and bright stars or planets into blobs of equal size for easy comparison. For example, the Moon may or may not outshine Antares, which is magnitude +1.1 and just 16° to its east. Jupiter (magnitude –2.0) will be low in the western sky during this event for North America. The rising planet Mars (magnitude –0.3) will be a convenient reference beacon for Europeans before dawn.

Also be on the lookout for anomalous colors or shadows within the umbra, like the dusky "isosceles triangle" that English astronomer J. L. E. Dreyer noticed with the naked eye during the January 28, 1888, eclipse.

A digital camera mounted behind a telescope’s eyepiece can snap fine close-ups of the eclipse’s partial phases. But a fixed camera capable of multiple exposures on a single frame of film is ideal for recording an eclipse sequence. Simply press the shutter every five minutes or so. You’ll need a wide-angle lens, of course, because the Moon will travel 45° across the sky between the first and last contacts with the umbra. Turn off the camera’s automatic metering system, if any. With ISO 400 film you might try ¼ second at f/8 for the partial phases, boosting the exposure to 3 seconds at f/4 during totality.

Sky & Telescope welcomes images of this lunar eclipse (as well as the annular eclipse on May 31st) for possible publication. Just describe clearly what you did so it can be explained in a caption for the benefit of our readers.

As the much-dimmed Moon makes its way across the stars of Libra, observers with backyard telescopes will be able to watch it cover and uncover many faint stars. For example, 5.5-magnitude ZC 2217 will be occulted north of a line from Montana to southern Florida (see the map in the online article "Lunar Occultation Highlights for 2003").

If you're interested in making careful timings of individual craters and other features as they enter or leave the umbra, please refer to the article "May's Two Eclipses" on page 104 of the May issue of Sky & Telescope.