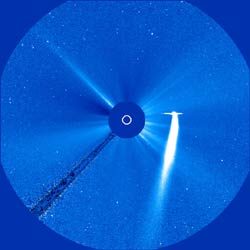 Comet Bradfield is plainly visible in this image acquired by SOHO's LASCO C3 coronagraph on April 18, 2004. The Sun is in mid-frame, hidden by an occulting disk. Comet ASAS will not appear as bright and, unlike Bradfield, may not survive its close encounter with the Sun.

The discovery announcement on IAU Circular 8402 includes the preliminary orbital elements by Brian G. Marsden, director of the Minor Planet Center in Cambridge, Massachusetts. These show that Comet ASAS (C/2004 R2) will pass fairly close to the Sun — both in the sky and literally — during the coming weeks. It reaches perihelion on October 7, 2004, well inside the orbit of Mercury and just 0.11 astronomical unit from the Sun. For a week or two around that time, the only way to see it will be via the Internet on images taken by the SOHO spacecraft as the comet glides just 1.2 degrees north of the Sun's center.

Until the end of September, the comet should be visible in ordinary telescopes mainly from the Southern Hemisphere (see the ephemeris below). If it survives perihelion, it will enter the evening sky for skywatchers north of the equator. But because this is not an intrinsically large comet, it could go "poof" in the Sun's heat. Similar objects studied by comet expert John Bortle have done just that.

The ephemeris below, based on Marsden's elements, gives the comet's right ascension and declination at 0 hours Universal Time on each date, followed by its elongation from the Sun in degrees, predicted visual magnitude, and the constellation it's in. No constellation is listed between October 3rd and 12th inclusive because the comet is too close to the Sun to be viewed safely.