Here in Austin, Texas, attendees at the American Astronomical Society meeting are buzzing about the discovery of a possible supernova in the irregular galaxy NGC 3239 by amateurs Bob Moore, Jack Newton, and Tim Puckett. 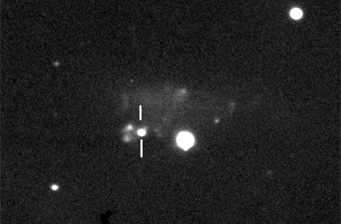 
Puckett Observatory Supernova Search
The supernova showed up in this unfiltered CCD image that the trio took during an automated observing run on January 7th with a 16-inch (40-cm) reflector in Portal, Arizona. At that time the putative supernova was at magnitude 14.6; Puckett confirmed it at 14.4 the next day with the same scope. The most recent value is 13.9, and it might continue to brighten before the explosion reaches its peak.

Several professional astronomers at the meeting have already started putting out e-mails and calls for spectroscopic observations. They hope to catch the supernova early and gain important information about what kind of explosion it is and, perhaps, what its progenitor was. Nothing shows up at this position in images taken by Puckett two weeks ago — at least, nothing brighter than magnitude 19.

NGC 3239 is roughly 30 million light-years away (estimates vary), in the constellation Leo. Puckett notes the object's position as 24.65 arcseconds east and 16.1 arcseconds south of the galaxy's center. You also can get a sense of the object's location in this image by Australian amateur Joseph Brimacombe.

By the way, Puckett's supernova search, begun in the 1990s, involves amateurs in several countries and has more than 200 discoveries to its credit.