While twilight deepened in Palm Springs, California, on May 15, 2003, renowned sky artist Don Davis recorded the lunar eclipse with his sketching materials. “I found 9 x 63 binoculars gave the best color impressions,” he writes, “with a 6-inch telescope allowing excellent location of the color zones and shadow edge.” Click on the image to see all nine sketches.

On Saturday night, November 8–9, 2003, the full Moon will pass through the Earth’s shadow for skywatchers throughout the Americas, Europe, Africa, and western and southern Asia. But this eclipse will be unusually brief, remaining total for only 25 minutes as the Moon skims barely inside the southern edge of our planet’s shadow.

During a total eclipse of the Moon, the only illumination reaching our satellite comes from the sunsets and dappled dawns that are going on at the time all around the rim of our planet. Even where local skies are crystal clear, a total lunar eclipse can appear fiery orange, murky brown, or dusky red-gray according to the net effect of clouds and haze elsewhere around the globe.

During November’s lunar eclipse, the Moon crosses barely inside the southern part of the Earth’s shadow core (the umbra). The partial phases of the eclipse occur while the Moon is moving across the umbra’s edge. Much less noticeable are the earliest and latest stages of the eclipse, when the Moon is in the shadow’s pale outer fringe, or penumbra. Only when the edge of the Moon is at least halfway into the penumbra is any shading visible at all.

Skywatchers in eastern North America can see the eclipse begin as twilight deepens and the Moon rises early on Saturday evening; the event will be over by midnight. For those living in the western half of North America, the partial phase of the eclipse will already be in progress when the Moon rises around sunset. In Europe, Africa, and western and southern Asia, the eclipse is visible much later at night or before sunrise on Sunday morning. The illustration and table (below) tell what to look for and when. (If you're not in the zone of totality or are clouded out on eclipse night, Saros Group Scientific Expeditions will broadcast the eclipse from the Canary Islands.)

Despite being greatly dimmed in the Earth’s shadow, an eclipsed Moon typically remains brighter than most of the stars in the sky. But there have been notable exceptions to this rule. By carefully estimating the Moon’s stellar magnitude at mideclipse, skywatchers can measure the overall effect that volcanic eruptions in the last few years and other sources of high-altitude haze may have had on our atmosphere’s transparency. 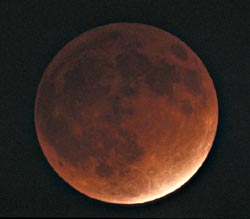 This November, for example, no one can say in advance whether the eclipsed Moon will be dimmer or brighter than Mars, shining at magnitude –1.0 about 66° to its west. Off the Moon’s eastern side, almost as far away, the planet Saturn (magnitude –0.1) can serve as a handy “comparison star” for European observers; it will be high in Europe’s eastern sky. Even-brighter Sirius (magnitude –1.4) will be shining lower in the southeast.

But widely spaced objects like these can lead to uncertain results. A more accurate way to gauge the Moon’s brightness is the “reversed binoculars” technique used by Brazilian observers Helio C. Vital, Alexandre Amorim, Willian Souza, and Antonio R. Campos. During the total lunar eclipse last May 15–16, for example, they found that the Moon in backward binoculars matched the star Pi Scorpii (magnitude +2.9) in the open sky. Prior tests had established that their binoculars produced 5.0 magnitudes of dimming on a distant light source, so this meant the eclipsed Moon was magnitude –2.1. Oddly enough, their measurements indicate that minimum light occurred some minutes before mideclipse. 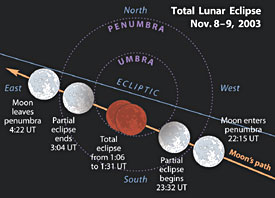 During November’s lunar eclipse, the Moon crosses barely inside the southern part of the Earth’s shadow core (the umbra). The partial phases of the eclipse occur while the Moon is moving across the umbra’s edge. Much less noticeable are the earliest and latest stages of the eclipse, when the Moon is in the shadow’s pale outer fringe, or penumbra. Only when the edge of the Moon is at least halfway into the penumbra is any shading visible at all.

As in the past, Sky & Telescope seeks careful timings of individual craters and other features entering or leaving the umbra. (For a list of estimated times when various features will enter and exit the umbra, see the November issue, page 101). Just before the eclipse, adjust your watch to the second using radio or telephone time signals. The idea is to time when the umbra’s edge (where the shadow changes brightness most abruptly) crosses the feature’s center.

Record your times to the nearest 5 seconds, and e-mail them to [email protected], mentioning your full name, telescope aperture, magnification, and sky conditions. Such timings will help in locating the umbra’s southern edge at this eclipse. In May 2003, the Moon crossed the umbra’s northern edge; more than 300 timings were received from 17 observers around the world. Using these timings, we hope to measure the “flattening” of the umbra, an effect influenced by cloud levels in the Earth’s polar regions as well as the planet’s ellipsoidal shape.