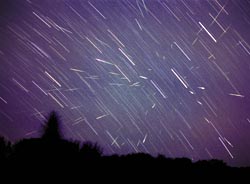 Patricia Totten captured dozens of brilliant meteors from Ayer's Rock, Australia, during the height of 2001’s second Leonid storm. Notice how their tracks appear to emanate from roughly the same direction, or radiant, in the eastern sky. Since her Nikon FG camera was fixed on a tripod during the 15-minute exposure, stars appear as short trails.

Anyone can plan to go out and look for the strong return of the Leonid meteor shower expected for the early morning hours of Tuesday, November 19th. A very bright Moon will be lighting up the night, but even so, many meteors may show through the moonlit sky. Here are the best predicted times to watch:

In the Eastern time zone, from 5 to 6 a.m. Tuesday or just before dawn, whichever comes first at your site. (You can find when morning twilight begins by entering your location into our almanac.) Also, skywatchers in the northeastern U.S. and Atlantic Canada can try looking for a possible earlier, lesser wave of meteor activity from about 11:30 p.m. to 12:30 a.m. EST or AST.

Find a good site with an open view high to the north or east (away from the Moon), and plan to bring a reclining lawn chair and a sleeping bag for warmth. To limit lunar light pollution as much as possible, choose a site where you can observe in the shadow of a building or evergreen tree. Keep looking away from the Moon toward the darkest part of the sky.

More details about observing meteors and making scientifically useful counts can be found in several articles in the Meteors section of this Web site.

For more on this year's Leonids (including predictions for Europe, the Mideast, and West Africa) see the article "Leonids 2002: The Grand Finale" in the November Sky & Telescope, page 95.