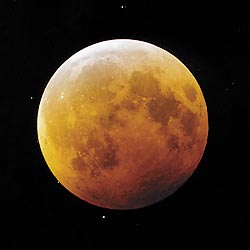 This view of totality, taken on January 9, 2001, by Swedish astrophotographer Bengt Ask, shows the eclipsed Moon amid several bright stars in Gemini. He used an 8-inch Schmidt-Cassegrain reflector with a focal reducer and a 6-second exposure on ISO 400 film to capture this scene. Totality on October 27–28, 2004, may look like this, as the geometries of the 2001 and 2004 eclipses are similar.

The best astronomical events usually seem to happen at the worst times and places — at 3 a.m. low above your most obstructed horizon, or maybe only in East Antarctica. But not this time, not for observers anywhere in the Americas. On October 27, 2004, the full Moon will undergo a deep total eclipse lasting for 1 hour 22 minutes, when it will be high in the eastern sky after dark but while most people are still awake and about.

The only slightly problematic area will be near the West Coast of North America, where the partial phase of the eclipse will begin just a few minutes after sunset and moonrise. But if you have an open view low to the east, even this situation will only add to the drama. As twilight fades, westerners will see the shadow-bitten Moon coming into stark view low above the landscape, and by the time totality begins, the sky will be getting quite dark and the Moon will be fairly high.

What's more, in a conjunction of events never before seen in history, this eclipse happens during Game 4 of the World Series. The World Series Lunar Eclipse should be visible to fans with good sight lines from Busch Memorial Stadium in St. Louis, and we can hope that TV crews periodically aim up to show the progress of the event — if the sky is not too cloudy! Millions of watchers could be inspired to duck outside for a look between innings. (P.S.: Go Sox!)

Europe and much of Africa also get a good view of the eclipse, but at a less convenient time: before dawn on the morning of October 28th. 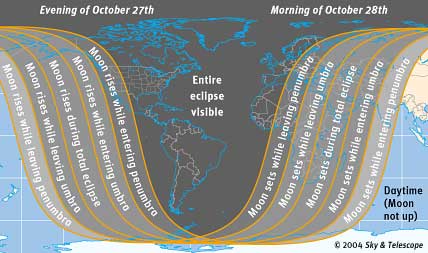 Find your location to see whether the Moon will rise or set during any phase of the eclipse for you. Because an eclipsed Moon is always full, the Sun sets or rises almost simultaneously — on the opposite horizon.

If you're clouded out (or can't see the eclipse from your location), try these sites for possible live webcasts of the eclipse: