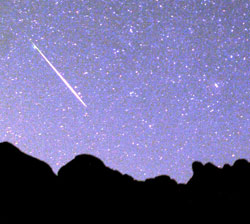 Wally Pacholka caught this Perseid streaking down in the dawn of August 12, 2005, over the mountains of the American Southwest. He used a simple digital camera on a tripod, set for a 30-second exposure at ISO 1600.

To the delight of untold thousands, the 2005 Perseid meteor shower came off about as predicted last week, but with an unusually high proportion of especially bright meteors according to many preliminary reports.

The North American Meteor Network (NAMN) "has received over 200 hours of observations up to this point," Mark Davis of the NAMN told Sky & Telescope on August 18th, six days after the peak of the shower's activity. "At present, the Perseid count is at 3,077. Reports vary widely due to observing conditions and skill level. There was no indication of the [brief] enhanced activity predicted for August 12th [see Sky & Telescope, August issue, page 65]. Several observers commented that the bright Perseids made up for the average rates."

In fact many watchers said the brightness of the meteors made for a good show even through light pollution.

"The morning of August 12th clearly had the highest rates, with an average of 40 to 50 seen per hour," continues Davis. "The rise and fall to this peak is evident in that only about 16 to 20 per hour were reported on the morning of August 11th, while August 13th had rates in the neighborhood of 25 to 30 per hour." These are raw numbers not yet reduced to the standard zenithal hourly rate. Many observers all over the world are still reporting to the NAMN and the International Meteor Organization; it will be weeks before the full picture is compiled. 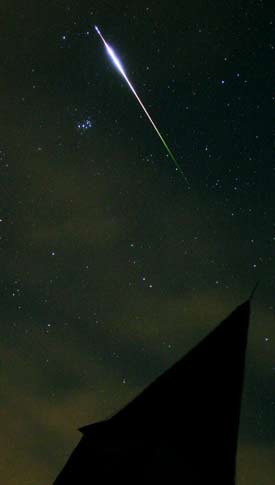 While watching for early Perseids on the night of August 10–11, 2005, a group in the Pohorje Mountains of Slovenia saw a dazzling sporadic (non-shower) fireball streak upward past the Pleiades at about magnitude –8. Using equipment set up by Simon Krulek (a Canon 300D digital camera set at ISO 1600 with a 21-mm f/3.5 lens), Peter Atanackov was lucky enough to catch this picture of it. The fireball appeared at 1:57:10 August 11th Universal Time.

Some observers also posted their data and stories on the Meteorobs mailing list. Robert Lunsford and Peter Gural in Southern California set up four image-intensified video cameras to record meteors all over the sky. On the night of August 11–12, Lunsford wrote, "I was casually watching the southern skies around 21:00 local time when a long Perseid earthgrazer appeared over the house. It was a deep orange color and a great way to start the night.... We began counting at 23:30 PDT (6:30 Universal Time). Rates were fairly steady throughout the morning, with the best activity occurring during the next to last hour."

On the same night, wrote David Stine of Oklahoma, the Astronomy Club of Tulsa hosted a big crowd at its dark-sky observatory. "The Milky Way was awe-inspiring, and objects such as the Lagoon jumped out at you." Even so, "The Perseids this year, I felt, were not as good as last year." Nevertheless he described many of the meteors as bright and leaving trains lasting a few seconds. In one case "I missed the entire meteor as people were shouting and going crazy, but I still had enough time to turn around and see the train still in the sky. I watched
it for at least 4 seconds before it disappeared. It reminded me of the the Leonid fireballs. We had over 50 people at our observatory, and most were not disappointed."

Bill R. Smith of Ukiah, California, also remarked that more Perseids than usual left trains, "some lasting visually for up to 5 seconds. On several occasions we noted 'double meteors,' in that right behind a bright meteor another of similar magnitude followed — nearly on the same path, and within a second or two."

I myself watched on the night of August 11–12 from the edge of a lake in the wilds of eastern Maine. To me the Perseids seemed relatively sparse but bright and colorful, often with yellow heads contrasting with blue tails. And for the first time I saw a definite "corkscrew meteor" — one that left a spiral trail, as described and pictured in the September Sky & Telescope, page 77. Mine looked better than the photo there; its trail was more clearly jagged. The whole thing appeared almost instantly, much too fast for the eye to track individual wobbles.