See Vesta at Its Brightest! 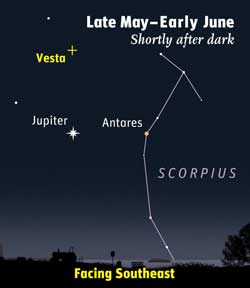 Throughout May and June you'll find the asteroid Vesta not far from dazzling Jupiter and lesser Antares. Click the image to see a detailed finder chart (with stars plotted to magnitude 7.0, much fainter than Vesta this season), or click here for a black-and-white version.
(On the finder chart, tick marks on Vesta's path show its position at 0:00 Universal Time on the dates indicated. In the time zones of the Americas, this is on the evening of the previous date.)

How many planets can you see using your eyes alone? The usual answer is five: Mercury, Venus, Mars, Jupiter, and Saturn. But two additional objects also qualify fairly easily. Uranus and the asteroid 4 Vesta can both become as bright as about magnitude 5½. Uranus is detectable in a dark sky for many months every year. But Vesta, the brightest asteroid, achieves naked-eye visibility only rarely — and this is one of those times!

Jupiter, the brilliant "star" that rises in the east in late evening, is your guide; Vesta is several degrees north of it, as shown in the chart at right. In early May, Vesta brightens to magnitude 6.1. It peaks at magnitude 5.4 in late May and early June, then it fades back to 6.0 by July 1st and 6.7 on August 1st.

Binoculars show Vesta very easily. But also try looking for it with your unaided eyes during, in particular, the moonless periods of about May 7–20 and June 4–18. You may be surprised at how easy it is to "discover" a planetary body orbiting the Sun that (as far as we know!) eluded every skygazer for millennia. We see what we expect to see and disregard the rest.

Click on the graphic here to get a finder chart. On the finder chart, tick marks on Vesta's path show its position at 0:00 Universal Time on the dates indicated. In the time zones of the Americas, this is on the evening of the previous date.

This apparition of Vesta is the best since 1989, when the asteroid reached magnitude 5.3. We're favored so well because this asteroid comes to perihelion, the point in its 2.36-year elliptical orbit that's closest to the Sun, just three weeks after it's closest to Earth. Vesta passes a mere 1.14 astronomical units (106 million miles) from us, and, moreover, its surface is sunlit a little more strongly than usual.