The New Year begins with plenty of celestial action. Check out brilliant Mars in January, February’s total lunar eclipse, and a planetary dance at dawn in February and early March.

On December 18, 2007, Mars passed within 55 million miles (88 million kilometers) of Earth; close but not as close as in 2003. Still, as 2008 opens, the red planet remains nearby and is visible as a bright, reddish beacon shining at magnitude –1.5 near the Taurus/Gemini border. During January, large backyard telescopes will still reveal a satisfying amount of detail, but Mars is receding, so don’t delay your observations.

Also in January the Quadrantid meteor shower peaks. This is a short but strong display — up to 100 meteors per hour might be seen after midnight on the 4th. And between 2 a.m. and 3 a.m. Eastern Standard Time on January 18th, the 10-day-old Moon slides past the Pleiades Star Cluster. Binoculars and small telescopes provide the best views. 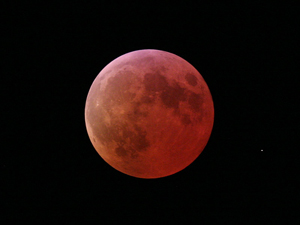 There are two eclipses in February: an annular eclipse of the Sun on the 7th and a total eclipse of the Moon on the night of February 20–21. The lunar eclipse is a fabulous sight for Europeans and North Americans. See our 2008 eclipse article for details.

Don’t neglect the dawn sky. In early February two brilliant worlds — Venus and Jupiter — appear close together, low in the southeast at dawn. They’re joined by the crescent Moon on the 4th. During the month Jupiter moves up and away from Venus, which is joined by Mercury at month’s end.

In early March the crescent Moon passes Jupiter on the 2nd and 3rd, and parks itself next to Venus and Mercury on the 5th. During the afternoon of the 5th, the thin lunar crescent occults (hides) Venus for viewers in central Canada and most of the United States. It’s a daytime event, so you'll need a telescope to see it. But be very careful not to point your telescope at the Sun nearby, or you may be blinded for life.

As spring warmth spreads across the Northern Hemisphere, don’t miss the Moon passing near the Pleiades in early April, Mars drifting through the Beehive Star Cluster in May, and a double transit of two of Jupiter’s moons in June. 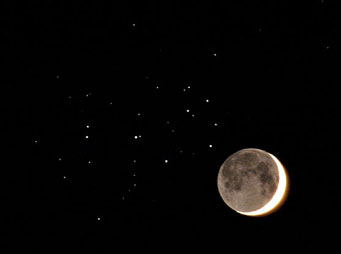 The crescent Moon sneaks up on the Pleiades in this view by Finnish astrophotographer Pekka Parviainen.

During the evening of April 8th, observers in eastern North America are treated to a beautiful occultation of some members of the Pleiades Star Cluster by a thin crescent Moon. Three evenings later, skygazers in western North America can see the first-quarter Moon pass a mere 1/4? above Mars.

If you’ve never knowingly seen Mercury, the evening of May 6th is the time to try. About 45 minutes after sunset, this elusive little planet appears low in the west-northwest, just below the thin crescent Moon.

Even though Mars has faded significantly since January, it’s still worth following, particularly on May 22nd. This evening the red planet glides across the northern edge of the Beehive Star Cluster. Use your telescope to track Mars; its motion against the cluster’s stars will be easily visible on an hourly basis.

A pair of telescopic challenges awaits North America observers in June. For those in the eastern half of the continent, a double shadow transit of Jupiter’s moons Europa and Ganymede will take place on the 22nd. Europa’s shadow will already be on the planet’s face when Jupiter rises about 9:30 p.m. Eastern Daylight Time. Then during the morning hours of the 23rd (just prior to midnight on the 22nd on the west coast) the Moon occults Neptune.

Finally, the crescent Moon passes through the Pleiades during the pre-dawn hours of June 30th. The east coast of North America is again favored for this sight. 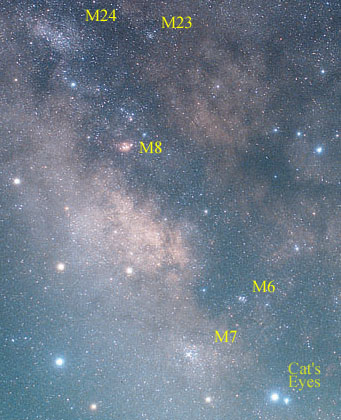 Under a dark sky, all the labeled objects are readily visible to the unaided eye, as are the star clouds and the dark lanes that crisscross them. But you'd need small binoculars to resolve this many individual stars.

Take advantage of warm summer nights to head outside and skywatch. Find a dark-sky site and explore the Milky Way with binoculars. Watch Mars, Saturn, Regulus, and the Moon do a celestial shuffle in July. Lie back and watch for Perseid meteors in August. And challenge yourself to find two remote planets in September.

July opens with a pretty scene in the west at dusk. Mars and Saturn have drifted past Regulus, and on the 5th and 6th they’re joined by a crescent Moon. On the 10th Mars slides past Saturn, less than a degree below the ringed planet. On the opposite side of the sky, Jupiter rises as the Sun sets, is visible all night, and is therefore well-placed for telescopic viewing.

August is a busy month. Every year, during the morning hours of the12th, the Perseid meteors put on a display. It’s one of the better meteor showers: up to 60 meteors an hour can be seen streaming from a point in the northeast just below the W of Cassiopeia. And this year August hosts a pair of eclipses: a total eclipse of the Sun on the 1st, and a partial eclipse of the Moon on the 16th. See our 2008 eclipse article for details.

If you can find Venus low in the west shortly after sunset on September 11th, look carefully for Mars tucked in beside it. Can you also find faint Mercury to their lower left? Eight evenings later, if you live in the northeastern United States or eastern Canada, turn your attention to the Moon and watch it pass through the Pleiades Star Cluster.

The eastern half of North America is favored again when Neptune vanishes behind the nearly full Moon on September 12th; you’ll need a telescope to see it. When the Moon isn’t around, everyone can seek out both Uranus and Neptune in a small telescope, or binoculars if you have a really dark sky. Surprisingly few stargazers have spotted these two worlds. But it's quite easy to do with the help of our handy observing guide.

This autumn, Venus is the “star” of the evening sky. Shortly after sunset on October 2nd, can you spot it below and to the right of the crescent Moon? You’ll need a clear southwestern horizon to do so. If you can, then you have a perfect vantage point to follow Venus as it climbs higher with every passing sunset. At the end of each of the final three months of 2008, the crescent Moon joins this brilliant planet to create a beautiful sight in the sunset sky.

During the early hours of October 17th, the nearly full Moon passes through the Pleiades Star Cluster. Observers in the western half of North America have the best view. On the 31st, the crescent Moon returns to the sunset sky and hangs below Venus; November 3rd finds the Moon next to Jupiter.

Every clear evening in November, step outside after sunset to watch the show as Jupiter sinks into the twilight while Venus rises. The grand finale comes on November 30th and December 1st when the crescent Moon sits below, then above, the pair of planets that are now a mere 2? apart.

In 2008 the Moon slices through the Pleiades Star Cluster six times; the final pass occurs on the night of December 10–11. Observers throughout Canada and the United States will be able to watch; the drawback is that the Moon is nearly full. That same full Moon will interfere with the Geminids, of one of the year’s best meteor showers, which peak on the night of December 13–14.

At year-end the post-sunset show continues. Jupiter is very low, but is joined by Mercury and a crescent Moon on December 28th and 29th. As you head out on the evening of the 31st to celebrate the start of 2009, take a moment to again cast your gaze westward. There you’ll see a beautiful sight: brilliant Venus hanging just below the Moon.