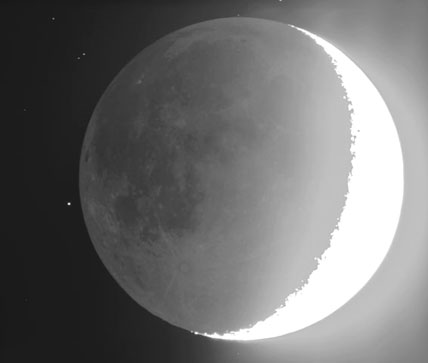 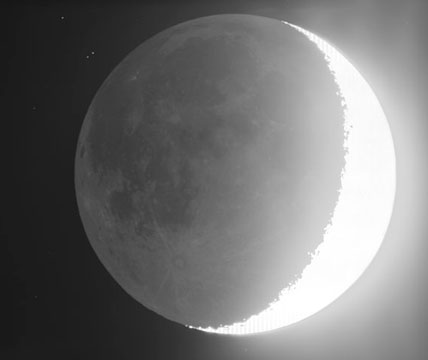 . . . Now you don't. Stars snapped out instantaneously on the Moon's advancing earthlit limb as the Moon crept across the Pleiades for eastern and central North America.

A hundred people were milling and chattering inside the church dining hall at a fundraising dinner, but I was outside alone in the churchyard gazing at the Moon. Resting on my shoulders was my homemade image-stabilizing binocular frame (Sky & Telescope: October 2005, page 107), and in the view of the 10x50 binoculars was a glorious spectacle: the crescent Moon amid the Pleiades in the last fading purple twilight. For now, I wanted the show all to myself. I watched as the Moon's earthlit limb crept surprisingly quickly up to 4th-magnitude Electra, one of the stars forming the bottom of the Pleiades' "dipper" shape. And suddenly Electra was gone. 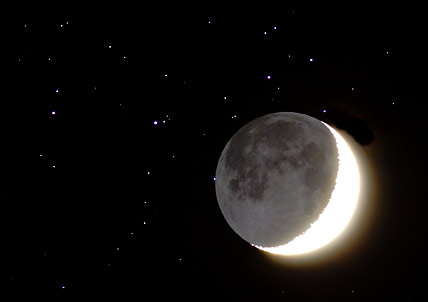 Also shooting the Merope occultation was S&T's Gary Seronik. 'This was taken with a Nikon D200 digital SLR attached to a William Optics 66mm ED refractor,' he writes. 'Merope is just about to be occulted in this 2-second exposure. I waited for Alcyone's occultation, but, just before the big moment, a band of thick, low cloud swallowed the Moon and Pleiades whole.'

Having caught one occultation, I decided it was time to spill the secret. I went inside and announced a viewing party outside. A stream of people lined up to put the binocular frame on their shoulders and exclaim at the rare celestial view.

Clouds came and went, adding to the drama of the scene except when they blocked the Moon. A few miles away, meanwhile, S&T's Dennis di Cicco was out with a camera-equipped scope. He caught the occultation of Merope seen above, then he and his wife Hilary switched to two wider-field telescopes to watch visually. "We had a very lucky break in the clouds," he wrote. "Actually the fast-moving clouds gave a pretty 3-D appearance. As an aside, the two scopes we used were the 6-inch Allyn J. Thompson reflector [the prototype for the "Making Your Own Telescope" series in Sky & Telescope in the 1940s] and Walter Scott Houston's 5-inch Apogee scope — which put a bit of an historical spin on the observations."

More people's pictures are in a [email protected] photo gallery.

The next good Pleiades occultation anywhere in the world happens for eastern North America again, before dawn on the morning of July 20th. Stay tuned.