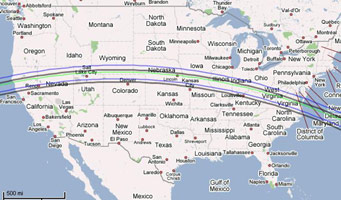 This map shows the shadow path across the United States from the occultation of the star 32 Lyncis by the asteroid (372) Palma. The predicted path's limits are in blue, the actual path appears in gray.

On the morning of January 26th, at least 20 observers spread from Virginia to northern California timed the occultation of the star 32 Lyncis by the asteroid (372) Palma — in spite of the track shifting nearly half a path-width south of what was predicted. Although it was the coldest night of the season in many areas, it was clear over most of path and only a few observers were clouded out.

The observations can be fit to an ellipse with dimensions 207 kilometers by 184 kilometers (129 by 114 miles) to an accuracy of +/-2 km. The actual path was a little narrower than the predicted path. You can see the observations projected in the plane of the sky and the fitted ellipse here. In that figure, prepared by Brad Timerson and me, some departures from an elliptical shape are evident, such as a mountain at the north end of the asteroid that is left of center. The dashed line "21" is the last predicted central line of the occultation. The overall coverage of the
predicted path was excellent. 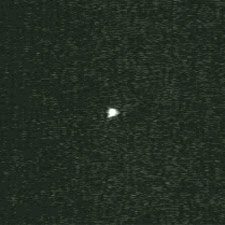 This 1.5MB MPEG file shows the occultation of the star 32 Lyncis by the asteroid (372) Palma as seen by Derek Breit in Anderson, California. Breit created the film from about 300 frames. At his location the star blinked out of view for 5.2 seconds.

The largest expedition was organized from the San Francisco Bay area by Derek Breit. Those observers were joined by Richard Nugent from Houston, Texas, and Mike Hoskinson from Edmonton, Alberta. They gathered at a motel in the small town of Anderson in the northern Sacramento Valley several hours before the occultation and decided how best to deploy their five stations near exits from Interstate 5. Good video recordings of the occultation were obtained at each station. In a similar effort, Paul Maley flew to Salt Lake City, where he met local observers who set up three stations near Ogden, Utah. Unfortunately, Maley braved temperatures of 13°F but saw no occultation. Still his observation was valuable, being the closest observer to the northern limit to have no event. His results constrained the shape of the asteroid.

Although about half of the mobile stations were too far north to see the occultation, the negative results did show that no satellites of Palma larger than about 4 km could have been on the northern side of the asteroid.

Maps showing the last predicted and actual paths of the occultation, and more details about the observations, are at http://iota.jhuapl.edu/mp372.htm.