The Changing Face of Comet Encke 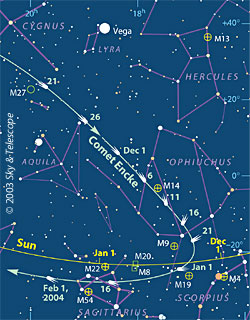 Comet Encke should be an easy target for small telescopes by the end of October. Low in the evening sky at the start of December, it crosses to the morning sky by that month’s end (as indicated by the corresponding location of the Sun). Mercury, Venus, and Mars also move through this field in late 2003 and early 2004, but their paths are omitted for clarity. Comet icons mark 0h Universal Time on the dates indicated. Click on the image to see the complete chart.

Of the 14 periodic comets predicted to return to the inner solar system in 2003, only a handful actually came within visual range of amateur telescopes. By far the brightest in this category is also the last to arrive on the scene: the celebrated periodic visitor known as Comet 2P/Encke.

This is the 59th observed passage of Comet Encke, whose appearances date back to when it was first seen by French observer Pierre Méchain in 1786. That was some five years before German mathematician Johann Franz Encke was born! The comet was “discovered” again in 1795, 1805, and 1818, and during the last of these returns Encke himself observed it. His calculation of the comet’s orbit led him to recognize that it was the very same object already seen in 1786, 1795, and 1805. Encke went on to predict that it would reappear 3.3 years hence, in 1822, and on June 2nd of that year Charles Rümker at Parramatta in New South Wales, Australia, proved him correct. For this, the comet was named after Encke. It was only the second comet known to be periodic (hence the “2P”), the first being Halley’s.

Initial visual sightings of Encke (magnitude 13) at its 2003 return came in late August. New Moon in October is on the 25th, so skies will be fully dark when Encke, now at 10th magnitude, comes close to caressing the northern edge of M31, the Great Andromeda Galaxy. A week later, near Kappa (k) Andromedae, Encke reaches the northernmost point of its passage across the sky and turns southwest, heading toward the Sun. As its solar elongation angle decreases, the comet should continue to brighten, probably peaking around 6th magnitude in late November to early December if it behaves as it has on previous visits.

Australian amateur Gordon Garradd took this 100-second CCD exposure of Encke’s Comet with a 25-centimeter (10-inch) reflector on June 5, 1997. Although the comet was then very low in the sky, the image shows a thin gas tail stretching leftward out of the 1/3&deg-wide field.

Comet Encke is closest to Earth in mid-November, passing our planet at 0.26 astronomical unit (39 million kilometers). Since its discovery more than two centuries ago there have been just nine returns, including this one, in which the comet has come within 0.3 a.u. of us. This will be its closest approach in the northern sky since November 1838, when less than 0.22 a.u. separated the Earth and Encke. The record, 0.19 a.u., occurred just six years ago, when Encke was a far-southern object.

Encke reaches perihelion (its point closest to the Sun) on December 29th, but observing it then will be a challenge. In late December and early January, the comet — perhaps at 7th magnitude or better — will be due west of the Sun in the morning sky, but the elongation will be barely 20°.

However, there’s renewed interest in observing Encke in the weeks near perihelion. Separate studies by Lars Kamel (Astronomical Observatory, Uppsala, Sweden) and Zdenek Sekanina (Jet Propulsion Laboratory) in 1991 showed that Encke’s brightness pattern is evolving. Peak intrinsic brightness used to occur before perihelion, but now it's occurring later in each cycle.

Sekanina has proposed that a vent in the comet’s southern hemisphere is increasing its output of gas at each return, whereas the vent in the northern hemisphere is decreasing. Assuming that the hypothesized vents continue to grow and diminish, respectively, with no other unforeseen developments, Encke’s display could change dramatically in the coming century. The comet could become much brighter post-perihelion as the nucleus’s prime active region shifts more to the south polar area.