Here's your chance to take part in a worldwide project as the minor planet 433 Eros makes a close pass by Earth. A similar close pass of Eros in 1931 allowed professional astronomers to refine the true scale of the solar system, starting with the Earth-Sun distance (the astronomical unit). This was the last great improvement in the scale of the solar system until interplanetary radar began making direct distance measurements in the 1960s. 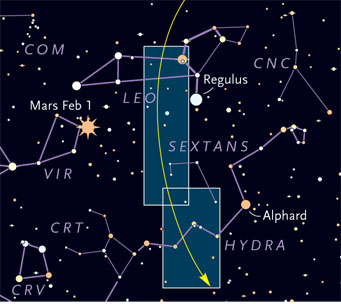 Click on the chart to download detailed printable finder charts for the asteroid Eros in PDF format.

This time it's the amateur astronomers' turn! All you need to participate is a digital camera that you can attach to a telescope or to a long telephoto lens.

Eros is pasing closest this week. It's magnitude 8.6 in the evening sky. See our article and finder charts.

The Eros Parallax Project is running from January 28th to February 3rd. Astronomers Without Borders is collaborating with Steven van Roode in gathering photographs of the asteroid as it glides by Earth. You can find detailed instructions and more at the project's website, but here's how it works in a nutshell:

The distance to Eros is determined by measuring its topocentric parallax, that is, the apparent difference in the asteroid's position against the stars as seen from different locations on Earth. Even though Eros will come no closer than about 17 million miles, it will show a perceptible (and measurable) position difference from place to place. 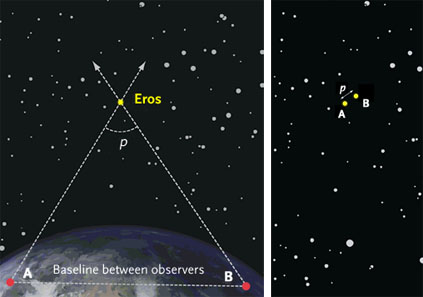 If two observers photograph Eros simultaneously from two widely separated locations A and B, the asteroid's position will show a shift (p) in their combined images relative to the background stars — by as much as 98 arcseconds on January 31, 2012.

Each night you'll be asked to take images of Eros at designated times, depending on your location. Then, using free online software, you determine Eros's celestial coordinates in your images and submit these positions electronically. Your measurements, when combined with the times the images were taken and your location on Earth, will be used to compute parallaxes and hence precise distances to Eros as it moves along its orbit.

This data will yield the size of Eros's orbit in actual miles — not just the orbit's size relative to Earth's orbit, which is all that classical position observations yield.

Once the true orbit size is known for even one body going around the Sun, Kepler's laws of planetary motion can be applied to yield the absolute — not just relative — sizes of all the other orbits in the solar system. This was a central problem in astronomy for centuries.

The Eros Parallax Project is also a great educational opportunity — the data and images will be made available for classrooms to process themselves if they wish. Moreover, this resource will archived indefinitely, no doubt inspiring some young astronomers to take part the next time Eros comes this close to Earth in January 2056.

Along with enjoying the night sky, developing observing skills and gaining an understanding of our solar system, participants and the students will repeat the work of the professional astronomers of the 1930s and learn how real scientific research is done.

The Eros project will also prepare students for the even rarer event coming this June: the transit of Venus. For this, another "historic reenactment" measurement of the scale of the solar system is also being organized by Astronomers Without Borders.

Founder and president of Astronomers Without Borders, and a contributing editor for Sky & Telescope, Mike Simmons has been a devoted amateur astronomer for more than 35 years.