The July 17–18 Occultation of Antares

The yellow arrows show the apparent path of Antares behind the Moon as seen from various cities. Click for larger version. Celestial north is up, and celestial east (lunar west) is left.

Every time the Moon makes its monthly circuit around the sky this year, it occults (covers) 1st-magnitude Antares. But some of these occultations happen in daytime, and most of them happen in parts of the world where you aren’t.

But luck is with you on the night of July 17–18, 2005, if you live in much of the southern or western United States, Central America, or northern South America. The waxing gibbous Moon will pass across Antares for these sites at a favorable hour. Elsewhere in the Americas, you can watch the Moon slide by the fiery orange supergiant in a near miss.

The last Antares occultation for North America came on the morning of March 3rd — when the star disappeared on the waning Moon’s bright limb, making it hard to follow in the glare without a telescope (March Sky & Telescope, page 67). This time, however, the star vanishes on the dark limb (since the Moon is waxing), where it will be easier to watch with binoculars or possibly even with the naked eye.

The maps also indicate whether your location will be in darkness, twilight, or broad daylight. For Northwesterners the disappearance happens before sunset, but even so, if the sky is good and clear you can locate the Moon low in the south with the naked eye and Antares next to it with a telescope.

The reappearance will be harder to observe. Not only do you have to be watching just the right place on the Moon’s bright limb at the right moment, but the glare of the Moon’s sunlit surface will interfere with the view. You probably will not be able to see Antares’ 5.5-magnitude companion star making its reappearance about 6 seconds before Antares itself.

If you position yourself within a mile or so of the occultation’s northern limit, you may see a spectacular grazing occultation on the Moon’s dark limb, with both Antares and its 5th-magnitude companion vanishing and reappearing repeatedly behind mountains and valleys sliding horizontally past. Look for detailed "graze maps" of the graze line, and information on possible observing expeditions to join, in the "Time Critical Events" section of the International Occultation Timing Association’s Web site.

As ever, IOTA seeks accurate timings of the disappearance and reappearance from as many locations as possible, especially along the graze line. Timings good to a few hundredths of a second can be made with an ordinary camcorder by filming the event while shortwave radio time signals play in the background (tune to WWV at 5, 10, or 15 MHz). Antares is so bright that, if you have a dark sky for the disappearance, you may not even need to shoot through a telescope. Some camcorders are sensitive enough that you can just set them up on a tripod, aim at the Moon, and zoom in. (Test beforehand, and use manual focus.) Actually, you want to aim a little west of the Moon so it will be centered when the disappearance happens. Aim one Moon-diameter west of the Moon for every 2 minutes you’re early. Turn up the shortwave, push the record button, and you can walk away to view the show in a telescope.

For your video recording to be useful, IOTA wants your latitude, longitude, and elevation above sea level to an accuracy of 30 feet (10 meters). A modern GPS receiver can achieve this if you take the average of several readings spanning many minutes. Don’t trust coordinates from Internet mapping services; they give false precision.

Mail your camcorder tape with your name, address, the accurate coordinates, and all other relevant information to David Dunham, 7006 Megan Lane, Greenbelt, MD 20770. An IOTA volunteer will determine the time of your event(s) by analyzing the tape’s audio and video tracks with special equipment. Include $4 for postage if you want the tape returned. 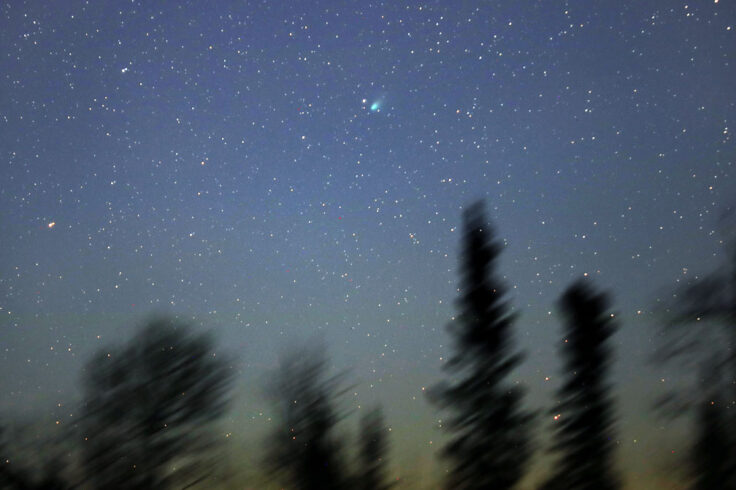