Comet Elenin has been getting a lot of press in recent months — and now it seems almost certain to be a total bust.

Meanwhile, people in the know have been following a comet that has never been hyped much, but seems almost certain to be a fine, though not spectacular performer for many months to come. 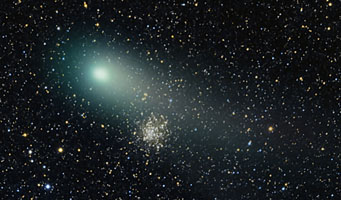 Comet Garradd passed M71 in Sagitta on the evening of August 26th.

We're talking about Comet Garradd (C/2009 P1). In early September it was already a fine sight through telescopes of all sizes, shining high in the evening sky at 7th magnitude. It has a bright head, a sharp starlike nucleus, and a tail that's stubby but well defined. And it's forecast to shine near its 6th-magnitude best all the way from October to mid-March. Not since Hale-Bopp has any comet remained so bright for so long.

Comet Garradd passes through the Coathanger asterism on the evening of Friday, September 2nd, then crosses the northwest corner of Sagitta, and soon enters Hercules, where it will remain until February. That means it’s high in the west after nightfall in October, lower but still in good view in November, and near the west-northwest horizon at the end of twilight around Christmas. But by then it’s already up higher in the east before the first light of dawn; the best viewing tips from evening to morning on December 16th. 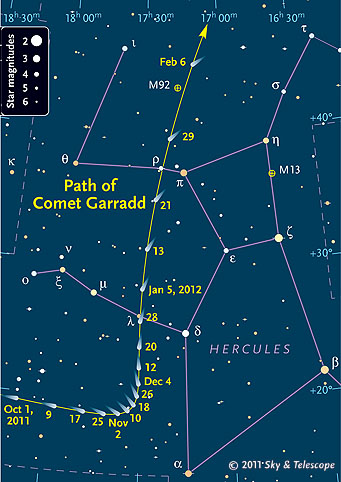 Comet Garradd crosses Vulpecula and Sagitta in early September, then remains in Hercules for the next six months. Click above for a full-page, printable finder chart.

As the comet climbs high in the early-morning sky of January and February, it will pass the Keystone of Hercules, skim ½° by the globular cluster M92 on the morning of February 3rd (mark your calendar), then sail northward past the head of Draco. It should stay bright all the way into spring as it returns to the evening sky.

Click here for a full-page, printable finder chart for Comet Garradd from September through early February, 2012.

Why is it changing so slowly? Comet Garradd is unusually large and distant as 6th-magnitude comets go. It never comes closer to the Sun than Mars’s average distance; at perihelion on December 23rd it’s 1.55 astronomical units from the Sun. Nor does the comet ever come near Earth; it’s about 2 a.u. from us all through October and November, and when closest next March 5th it will still be 1.27 a.u. away. Too bad! Garradd might have qualified for “Great Comet” status if had been on a trajectory to pass close to the Sun and if Earth weren’t on the wrong side of its orbit at the time.