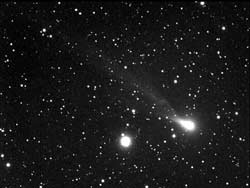 A pair of comets show some promise for May 2004, though keep in mind that predicting the brightness of comets remains a somewhat unreliable science.

The first is C/2001 Q4, detected at 20th magnitude on August 24, 2001, by the Near-Earth Asteroid Tracking (NEAT) survey program. As 2004 begins, Comet NEAT moves through Indus and curves into Tucana. In early April the comet, perhaps already sighted by unaided eyes, passes 7° north of the Small Magellanic Cloud. Three weeks later it’s less than 10° from the Large Magellanic Cloud. C/2001 Q4 continues to pick up speed as it passes closest to Earth (at 0.32 astronomical units) on the 6th and heads toward perihelion (the point in its orbit nearest the Sun), May 15th, at 0.96 a.u. from the Sun. Around this time it may shine as bright as 2nd magnitude.

During May this comet will become increasingly visible to Northern Hemisphere observers in the evening sky. It crosses the celestial equator on the 10th, heading north as it begins to fade. But even at the end of May, when this comet enters Ursa Major, it may still be brighter than 5th magnitude.

Use our interactive sky chart to follow Comet NEAT as it moves through the
Southern
and
Northern
Hemisphere skies during April and May 2004. The southern chart shows the sky for 8:00 p.m. on April 20th at 35° south latitude; the northern chart is set to 10:00 p.m. on May 7th at 40° north. To adjust the date and time, highlight the month, day, hour, or minute and click the "+" or "-" button. To alter your viewing location, press the "Change" button on the location bar.

The second comet is C/2002 T7, discovered by the Lincoln Laboratory Near Earth Asteroid Research (LINEAR) survey program on October 14, 2002, as an apparent asteroid. Images taken two weeks later revealed it to be a comet nearly 7 a.u. distant, and subsequent calculations by Brian G. Marsden (Minor Planet Center) showed that it, too, is a first-time visitor.

This comet spends most of January through April in Pisces. But it will be lost in the solar glare for about three weeks beginning in mid-March. When Southern Hemisphere observers sight this comet again in the morning sky, hopes are that it will be visible to the naked eye. Perihelion is on April 23rd, at 0.61 a.u. from the Sun.

Moving from Pisces into Cetus and then Eridanus, the comet will become an evening object by the second half of May. About May 19th, this visitor will approach to within 0.27 a.u. of Earth and peak in brightness.

Whether one or both of next May’s comets will be visible to the naked eye is still uncertain, but there is no doubt about their orbits and hence about their locations in the sky. This plot shows how well placed they’ll be for skywatchers in midsouthern latitudes, such as Australia, at the end of evening twilight. The sky will be moonless (or nearly so) after May 6th. Comet NEAT will also grace Northern Hemisphere skies in May.

Around then Southern Hemisphere observers could have a memorable scene in the evening sky. Imagine two comets of perhaps 2nd magnitude, both probably displaying post-perihelion tail lengths of many degrees! Such a pairing will be a unique experience for today’s generation.

However, according to veteran comet-watcher John Bortle, LINEAR is steadily falling behind the original brightness estimates. The current magnitude predictions (updated as of February 20th — see below) reflect the fact that this comet seems to be mimicing the classic brightness pattern shown by other "new" comets of the past. Bortle feels that LINEAR will still put on a nice show though probably not a spectacular one.

More information about these two comets is available in the May 2004 issue of Sky & Telescope, now on newsstands.