Venus and Jupiter Kiss in Twilight 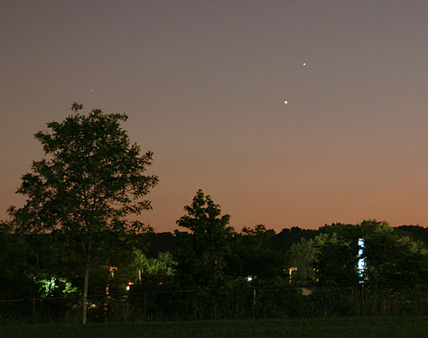 The September 1st conjunction of Venus and Jupiter. Sky & Telescope editor-in-chief Rick Fienberg shot this photo just after 8 p.m. EDT from the park behind the company's offices using a Canon 20Da digital camera. This is a 2.5-second exposure at f/5.6 and ISO 800 though a zoom lens set at 80-mm focal length. Note Spica just above the tallest tree.

On Thursday evening, September 1st, Venus and Jupiter had an eye-catching conjunction (close pairing) just 1.2° apart in twilight, as captured above. If you missed it, don't worry! The two planets will appear close together after sunset for the next few days as well, though they'll be starting to draw apart.

The best time to look is about 40 to 60 minutes after sunset. The brightest of the two planets is Venus. Off to their left is the much dimmer star Spica. If Spica isn't bright enough to show through the twilight, binoculars should reveal it easily. In addition, the waxing crescent Moon will join the party on September 6th and 7th.

Although these objects appear the same distance away as you watch them in the deepening dusk, this is very much an illusion. Venus is roughly 106 million miles from Earth (its distance changes during the period illustrated), while Jupiter is 575 million miles away, more than five times farther. The Moon is only about 220,000 miles distant, while Spica lies 1.5 quadrillion miles in the background.

Such big distances are better expressed by how long it takes light to cross them. Venus is about 10 light-minutes from Earth. Jupiter is 52 light-minutes from us, the Moon is only 1.2 light-seconds away, and Spica is some 260 light-years away. The light reaching your eyes from these sights has been in flight for very different amounts of time — something to think about when gazing at this unearthly view. 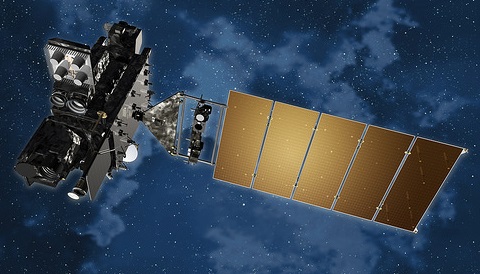 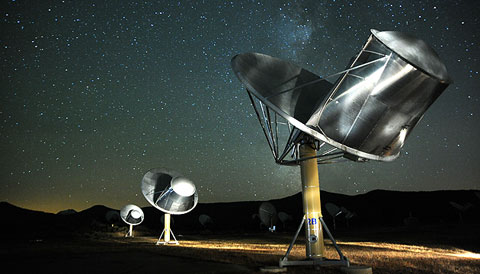