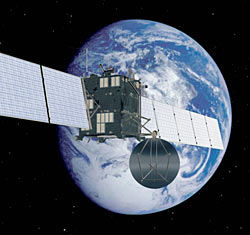 The European Space Agency's Rosetta probe should be visible from Europe and Africa in telescopes and possibly binoculars as it races by Earth on March 4th.

Skywatchers and sky photographers in Europe and Africa have a special target to try for on Friday evening, March 4th. The European Space Agency's Rosetta spacecraft will fly by Earth as part of its long, looping flight to land on a comet in 2014. Mission controllers predict that Rosetta will brighten to magnitude 8 or 9 that evening, visible in a small telescope or possibly even in large binoculars.

But you'll need good charts. Rosetta will sweep far across Leo, Cancer, Gemini, and Taurus during an observing window for Europeans that's roughly three hours long. Project scientists have prepared finder charts for several cities; the craft will be close enough (somewhat more than 10,000 kilometers away during this period) that your location will greatly affect its apparent position on the sky.

The European Space Agency is also holding a flyby photo contest for astrophotographers. "We expect that amateur astronomers using video cameras hooked up to their telescope will be able to distinguish the solar panels of Rosetta, which extend over 32 meters," writes ESA's Detlef Koschny. In addition, "we will try to put the High Gain Antenna in a position that it could also be visible."

Observers in the Americas, unfortunately, miss out. Although Rosetta passes closest while over this side of the world (minimum distance 1,900 km), it does so in broad daylight. When the tiny craft is visible from the Americas in darkness, it is many magnitudes fainter than during the European show. However, advanced CCD imagers may be able to catch it during the nights leading up to the flyby. Details are on the same Web site as the European finder charts. 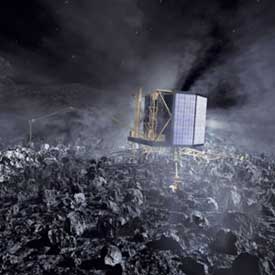 Rosetta's lander is equipped with two small harpoons and drills in its feet to secure it to the nucleus of Comet Churyumov-Gerasimenko when it lands in 2014.

Rosetta was launched in March 2004. This is the first of four planetary swingbys (three of Earth, one of Mars) that will accelerate it to meet up with Comet 67P/Churyumov- Gerasimenko nine years from now. The craft will match velocities with the comet's nucleus, take up orbit around it, and send a lander to touch down onto its surface. Actually, the comet's gravity is so low that "docking" might be a more appropriate word than "landing." No one knows exactly what kind of surface the lander will encounter.

Late Update March 4th: Amateurs have been successfully imaging Rosetta on its way in. An example is the image below, sent to us by Giovanni Sostero in Italy. Click for full image and details.