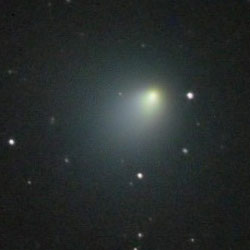 Comet 9P/Tempel 1 was glowing at about 11th magnitude when Johannes Schedler in Austria imaged it on the evening of May 2nd. He used an SBIG STL-11000M CCD camera at the f/3 prime focus of a 16-inch Cassegrain reflector for a total exposure time of 40 minutes.

Even if this were a normal year, the periodic comet 9P/Tempel 1 might invite amateur telescopes its way. But this year is unique. The comet, currently glowing at a very dim 10th magnitude in the evening sky near Spica, will be blasted by NASA’s Deep Impact probe (the cover story of the June Sky & Telescope) tonight, the night of July 3–4.

The latest time prediction (updated June 29th) is that the impact will occur at 10:52:12 p.m. Pacific Daylight Time Sunday night July 3rd, plus or minus about 10 seconds, as seen from Earth (that's 5:52:12 Universal Time July 4th). Much of the American West, Mexico, and Central America have a view of the comet in darkness at that time. There may be a brief flash, and the resulting debris cloud may brighten Tempel 1 substantially for hours, days, or possibly weeks.

Amateurs worldwide have joined the efforts to study the comet before, during, and after the impact. (For details of this compaign see page 70 of the June issue; at least an 8-inch telescope and a CCD camera are required.) But vast numbers of others will be watching just to see what happens, and to be part of this historic event. 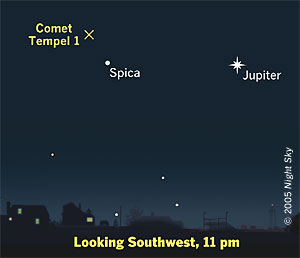 On the night of July 3–4 and for several evenings immediately afterward, Comet Tempel 1 will be situated in the western sky not far from the bright star Spica. Even after Deep Impact makes its splashy arrival, the comet will likely not be visible to the unaided eye. Instead, try looking in the location marked X with good binoculars or a telescope. The comet may look like a very faint, fuzzy star. Click on the image to get a higher-resolution version suitable for publication or broadcast. Most likely, you'll need to use a telescope and the more detailed map below to star-hop to the exact point to examine.

Pre-impact, Tempel 1 has been a tough target for amateur scopes, especially in the presence of any light pollution or summer haze. It has been running about a magnitude fainter than predicted. At least the comet is conveniently located: in the southwestern sky right after dark, with Jupiter and Spica providing naked-eye landmarks for getting started. Jupiter, in fact, is the brightest starlike object in the night sky.

The scene above provides only a rough guide. Use the map below to locate the exact position to examine with your telescope on any night from now through July 11th. Click on the map for the full-size version — the one to enlarge, print, and take to the telescope. This map is oriented the way the scene appears over your late-evening horizon, which means that celestial north is to the upper right.

Comet Tempel 1 is positioned near bright Jupiter and Spica in the evening sky. But it's very faint; you'll probably have to use the faintest stars plotted here to pinpoint the exact position to examine with your telescope, as described in the text. Click for better-quality image to enlarge and print.

Comet symbols on this map are plotted on the evenings of the labeled dates for the time zones of North America. The tails on the symbols point in the direction away from the Sun. Stars are plotted to magnitude 8.5, about as faint as a high-quality 50-mm finderscope will show. You will need to use the very faintest stars plotted in order to pinpoint the comet's exact location. If you don't enlarge the chart, bring a magnifying glass with you to read its finest details at the scope.

(Note: if your finderscope has a right-angle bend at the eyepiece, it probably shows you a mirror image, which will not match the map. In this case, you can try to flip the star patterns on the map left-for-right in your head before comparing them with what you see. Or use one of the other solutions to the mirror-image problem described in our article "Using a Map at the Telescope".)

Look right after the end of twilight, while the comet is still as high as possible above haze and light pollution. (You can find your local end-of-twilight time by checking that your location and time zone are correct in our online almanac. If you're on daylight saving time like most of North America, make sure the Daylight Saving Time box is checked; if not, check it and and hit "Go" next to it.)

From the moderately light-polluted outer suburbs of Boston, I was unable to see the comet even using a 12.5-inch telescope at 60x, 75x, and 180x on the clear evening of July 2nd. But on the same evening, Daniel W. E. Green saw the comet in a 10-inch reflector from the darkness of Pack Monadnock Mountain in New Hampshire. He estimated its brightness as magnitude 10.6 and the diameter of its coma as about 2.5 arcminutes.

Sky & Telescope editors Joshua Roth and Tony Flanders observed Tempel 1 on the evening of June 3rd under dark but hazy skies using a 12.5-inch reflector at 60x. "An elongated blur shaped like a watermelon seed, no bright nucleus" described Roth. Flanders called the comet quite large, but with a very low surface brightness that made it hard to see through the imperfect sky even with such a big telescope. Under crystal-clear very dark skies, by contrast, some observers recently report finding Tempel 1 with 3-inch scopes.

Large observatory telescopes showed the comet undergoing a natural flareup of ejected material on June 14th and an even bigger jet ejection on June 22nd. The second event brightened the comet by almost two magnitudes, but only for a few hours. The rapid fading of the ejected matter may not bode well for what we'll be able to see of the debris days after the Deep Impact strike. Since then there have been two additional, minor flareups of a few tenths of a magnitude lasting only an hour or two.

The comet's collision with Deep Impact's 370-kilogram projectile, at a speed of 6.3 miles per second, will release the energy of 4.8 tons of TNT. The timing was chosen so that at least two Deep Space Network tracking stations can be receiving live data from the probe during the action. The timing favors mostly the Pacific Ocean, as shown on the world map below; this is the side of the world facing the comet at impact time. (In all other parts of the world, the comet will be below the horizon.)

This is the hemisphere of Earth that will be facing the comet at impact time. It will be broad daylight in Australia and the Far East, but most of the American West has a fine view in the dark late evening — the Southwest especially.

Observers in the far west of North America get lucky. The farther southwest you are the better. The comet will be in a fully dark sky 25° above the horizon for Los Angeles and San Francisco, and 22° up for Tucson. There will be no Moon.

Seattle and Hawaii will be in evening twilight at collision time. Evening twilight will also be bright for observers in New Zealand, where the local date is July 4th. Eastern Australia won’t have a dark sky until at least two hours later.

What will we see? No one knows. There may or may not be a brief flash detectable in telescopes. But the expanding debris cloud, and perhaps continued venting of gas from the fresh crater, are likely to increase the comet's overall brightness for hours, days, or possibly weeks. Reports that it might become visible to the naked eye, however, are probably way overblown.

Comets that flare up as a result of splitting apart can remain anomalously bright for months or years. When comet 73P/Schwassmann-Wachmann 3 split in 1995, for example, it became 7 magnitudes brighter than before, and when it returned to perihelion six years later, it was still several magnitudes brighter than before it fragmented. On the other hand, well-observed outbursts from comets that remain intact (as Tempel 1 is expected to do) tend to last only for days or weeks. And events at Tempel 1 itself in the last couple weeks suggest that comets have even briefer flares that often go unnoticed. In any case, observers all around the globe will get good looks at Tempel 1 within 24 hours — weather permitting!

The Crash on TV and the Web

Kitt Peak National Observatory in Arizona plans a live webcast of the comet through a 20-inch telescope starting about an hour before impact and continuing for about 45 minutes after (when the comet starts getting too low near Kitt Peak's horizon). A new image of the comet will be posted about every 45 seconds.

The Carl Sagan Observatory of the University of Sonora in Mexico plans a live webcast in Spanish; 16-inch scope, new image about every 60 seconds. Choose either dial-up speed or broadband connection.

The Astronomical League and Dyer Observatory plan a webcast from a 14-inch telescope in Arizona; new image about every 90 seconds, live commentary by Robert O'Dell; may be limited to 500 connections.

NASA TV, which is available by satellite and over the Web, plans the following mission coverage. All times are Eastern Daylight Time:

NASA has produced an excellent animation of what the encounter and impact might look like up close. Much more about the mission is at NASA's Deep Impact Web site. See also the mission's home site at the Jet Propulsion Laboratory.

In the following weeks the comet will continue its southeastward trek through Virgo into Libra and Scorpius, passing Antares in early September. With its increasingly southern declination and its shrinking elongation from the Sun in our sky (73° by October 15th), observers in the Southern Hemisphere will be favored during this time. A chart of the comet's path through August and the first half of September is in the June Sky & Telescope, page 69.

When the fading comet finally disappears into the glare of the Sun late in the year, it will mark not only the end of a very special apparition but also the end of an era for this comet. Approaches to Jupiter in 2024 and 2036 will move Tempel 1’s perihelion distance from its current 1.5 a.u. to 2.0 a.u. Not until June 2122, when the perihelion distance shortens to 1.6 a.u., is the comet expected to again appear brighter than 11th magnitude. 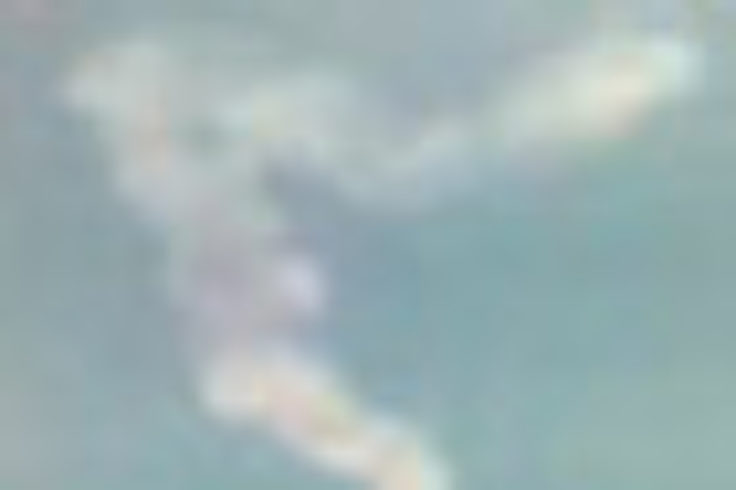