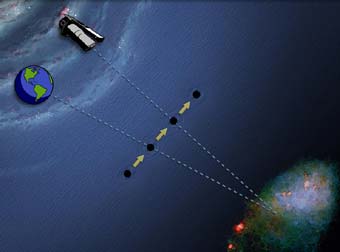 The black ball moving between Earth, Spitzer, and the Small Magellanic Cloud represents the dark object. By recording the time difference between the peak-brightness events as measured on Earth and by Spitzer, the objectâ€™s parallax can be determined and its distance calculated. The scale is greatly exaggerated; the actual separation between Spitzer and the Earth is miniscule in comparison to the distance to the dark object and the SMC.

Using a technique that mimics how the human eye observes depth perception, astronomers have coupled the infrared Spitzer Space Telescope with the ground-based Optical Gravitational Lens Experiment (OGLE) to identify a mysterious dark body around the Milky Way.

OGLE astronomers first discovered the dark-matter object (OGLE-2005-SMC-001) as it bent and amplified the light from a star in the Small Magellanic Cloud — an event known as gravitational microlensing. Since the lensing object emitted no light, astronomers thought it might be a MACHO (Massive Compact Halo Object), a dark-matter object thought to be a combination of black holes, isolated planets and faint stars.

To find the dark object’s position, scientists used a technique called parallax, which, like human perception, uses two different observing points (the eyes) to distinguish depth perception. The usual way to establish the parallax of an astronomical object is to measure the tiny change in the target’s position against distance background stars over the course of six months. In this case, Spitzer, located some 64 million kilometers (40 million miles) from Earth, acted as a second “eye” to observe peak brightness — the moment when observer, dark object, and background star are most closely aligned.

By comparing the time difference between when Spitzer sees peak brightness and when Earth sees it, scientists can figure out if the object is in fact a MACHO in our galaxy’s halo (the area above and below the spiral disk) or something else just outside the Milky Way.

“What we are trying to do is to locate a dark object that is far beyond the range of common parallax techniques used to measure distance to bright stars,” said OGLE scientist and lead author of the study Subo Dong (The Ohio State University) at the American Astronomical Society meeting in Honolulu last week.

While the microlensing light curve produced by OGLE and Spitzer observations was identical, the brightness peaks were slightly offset and scientists used this difference to figure out the speed of the object across the Earth/Spitzer axis. “This speed turns out to be highly dependent on the location of the lens. It differs by as much as seven times depending on whether the lens is in the halo or in the Small Magellanic Cloud,” says Dong.

Spitzer recorded peak brightness about twelve hours later than Earth. “From that we can determine that the lens is most likely...in the halo of our galaxy,” says Dong. Its estimated distance is 1,600 light-years.

The lens-producing MACHO is probably a 10 solar-mass black-hole binary, says Dong, because an ordinary stellar binary at the same distance would be bright enough to be visible, and it’s not.