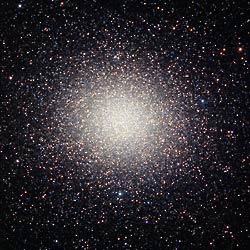 Glowing at 4th magnitude, Omega Centauri is dimly visible to the naked eye. Click for a Hubble Space Telescope view into the cluster's heart.

The great globular star cluster Omega Centauri is unique. It's the biggest and brightest globular cluster in the sky and a treasured sight for amateur observers who are far enough south to see it well. It's the physically largest globular in our Milky Way galaxy, containing millions of stars. And in recent years, astronomers have been finding other unique properties about it that are more mysterious.

For one thing, unlike most globulars it's supported partly by rotation, which gives it a slightly elongated shape. By contrast, most of the Milky Way's 160 or so globular clusters are beehive-like masses of stars swarming at random.

In addition, Omega Cen is the only globular in the Milky Way containing at least two different populations of stars born at different eras. Most of its stars have only about 1/40 the Sun's proportion of heavy elements, a sign of great age. But there's a second population of younger stars mixed in that have 10 times more heavy-element content and also have clearly aged less. These stars amount to 5 percent of the total. And there's an intermediate group of stars having various ages in between.

Three astronomers in Italy and Germany have just published a study of the three populations' motions. Although "the global scenario for the formation and evolution of Omega Centauri still remains a mystery," write Francesco R. Ferraro and Michele Bellazzini (Bologna Observatory) and Elena Pancino (European Southern Observatory), their work is helping to sort the situation out.

The youngest stars, the astronomers find, are clearly moving as a separate group with respect to the rest. Moreover, they don't share in the cluster's general rotation. And the intermediate-age group of stars also has a distinct motion of its own.

The astronomers say the young stars are the tattered remains of a different cluster that Omega Cen has swallowed and nearly assimilated. In fact, they say, in the same manner that "a typical galaxy evolves by accreting smaller systems, the past history of this giant cluster . . . was probably characterized by multiple accreting/merging episodes."

Other astronomers have suggested that Omega Centauri is not a true globular cluster at all, but the dense remnant core of a dwarf elliptical galaxy that the Milky Way has consumed and mostly stripped. If so, we're seeing a case of "hierarchical merging" of small bodies into a larger one merging into a still larger one — something that standard galaxy-formation theory says ought to occur.

A Triple Occultation by Eugenia and Its Moons