The peaks in the East Hills Complex are about 100 meters tall, three times higher than the Twin Peaks at the Mars Pathfinder site but three times farther away.

A Chinese proverb says that a great journey begins with a single step. Never has this been more apropos than in Gusev Crater at 3:41 a.m. Eastern Standard Time (EST) on January 15th. Spirit rolled down a ramp then "stepped" about 10 centimeters down onto the Martian surface. The successful egress was confirmed in an image beamed back to Earth by Spirit’s rear hazard identification camera.

"Today was a fantastic day. The end point of the day is that Spirit is a rover. We’re ready to roll," said jubilant flight director Chris Lewicki (Jet Propulsion Laboratory) at a January 15th press conference. Egress was the riskiest maneuver in Spirit’s mission since landing. Now that it has been successfully accomplished, we can look forward to several months of spectacular images and scientific discovery. 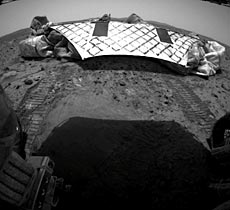 Spirit’s rear hazard identification camera returned this image of the lander back to Earth shortly after the rover crawled onto the surface of Mars.

For the next several days Spirit will remain within a few meters of the lander, where it will deploy its mechanical arm and analyze soil with its suite of nine cameras and three spectrometers. After that, scientists will direct Spirit to visit a nearby rock. The rover will look for chemical and mineralogical evidence that Gusev Crater was once a lake that may have been hospitable to life.

On Wednesday, January 14th, while Spirit was still perched atop the lander, NASA’s Mars Odyssey passed overhead, and the two spacecraft conducted simultaneous observations of the Martian atmosphere. On Friday, January 16th, Spirit’s panoramic camera and thermal spectrometer will look up at the same time that the European Space Agency’s Mars Express orbiter passes 300 kilometers overhead and looks down. The two spacecraft will be unable to see each other, but these combined observations will help scientists better understand the temperature and composition profile of Mars’s thin atmosphere as well as its dust content. Spirit will provide superb data on Mars’s lower atmosphere, while the orbiters should provide better data on the upper atmosphere.

"This is an historic opportunity," says Ray Arvidson (Washington University in St. Louis), deputy principal investigator for the rover science instruments. "The intent is to get observations from above and to get observations from below at the same time to do the best possible job of determining the dynamics of the atmosphere." Mars Express’s spectrometers will also reveal minerals in the area immediately surrounding Spirit, helping scientists on Earth decide exactly where to steer Spirit on its Martian sojourn.

No timetable has been set, but ground controllers will eventually command Spirit to begin its estimated six-week trek toward a crater 250 meters to the northeast. The crater is a particularly inviting target because the impact that created it ejected rocks from as deep as 30 meters below the surface. As Spirit approaches the crater, it will encounter more and more rocks ejected during the impact. These rocks will be a window into the Martian subsurface, and thus its history. Wind-blown dust and other sediments likely cover up most of Gusev Crater’s ancient past — the time when it might have been a lake the size of Connecticut. "We will have to look at a lot of different rocks to understand the deposits thrown out of the crater," says deputy project scientist Albert Haldemann (Jet Propulsion Laboratory), who adds, "It takes two to four days to do the analysis of a particular rock." 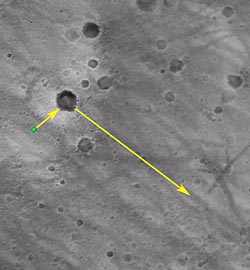 This composite image from Mars Global Surveyor and Spirit’s descent imager shows the rover’s landing site, which has been pinpointed to within a few dozen meters. The short arrow indicates the rover’s planned 250-meter trek to a crater. After that, the rover will travel toward the East Hills Complex, as indicated by the long arrow. It is unlikely that Spirit will make it all the way to the hills, which are three kilometers away.

While no exact timetable has been set, Spirit will next move toward the East Hills Complex three kilometers away. It is highly unlikely that Spirit’s batteries will last long enough for the rover to make it all the way there, but it will almost certainly encounter rocks and other materials that originated in the hills, and observations by Spirit’s panorama camera and thermal spectrometer may be able to identify minerals in different stratigraphic layers. Scientists want to learn the origin of the hills and how they relate to the crater itself. For example, did water once flow through Gusev Crater and erode most landforms while leaving the hills behind?

Spirit will not be alone on Mars for much longer. Its identical twin, Opportunity, is fast approaching, and is scheduled to land at 12:05 a.m. EST on January 25th on the opposite side of Mars, in a region known as Meridiani Planum. Infrared spectra from Mars Global Surveyor indicate that Meridiani Planum contains deposits of hematite, an iron-bearing mineral that usually forms in liquid water on Earth. If Spirit and Opportunity find evidence of water in Mars’s past, it will bolster hopes that Mars once bore life. "Everyone on the team feels confident about Opportunity, but we don’t feel complacent," says Haldemann.

Across the Atlantic, ground-controllers have yet to hear a signal from Britain’s Beagle 2 lander, which was scheduled to land on December 25, and hope is fading fast. "Being on the Mars Polar Lander team, I can sympathize with the Beagle 2 team," says Haldemann. "It is crushing when you don’t hear from your spacecraft. It is very unfortunate, because we were going to do complementary experiments."