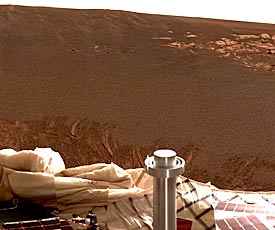 This mosaic was assembled from images taken by Opportunity's panoramic camera. The exposed bedrock at the upper right lies only about 10 meters to the southwest. Analyzing this outcrop should be akin to reading a Martian history book.

Such are the vagaries of space exploration that triumph can turn to tragedy, and back to triumph, in the span of just 48 hours. On January 23rd, the mood at the Jet Propulsion Laboratory (JPL) was grim as Spirit’s condition went critical. But by the early morning hours of January 25th, euphoric scientists and engineers were uncorking champagne. Opportunity had survived its perilous entry, descent, and landing, and Spirit appeared to be on the road to recovery.

"I came here prepared for a funeral," said Ed Weiler, NASA’s associate administrator for space science, at a press conference shortly after Opportunity’s safe landing in Meridiani Planum. "In the last 48 hours we have been on a roller coaster. We resurrected one rover and saw the birth of another today."

"A dream site" is the catch-phrase geologists are using to describe Opportunity’s location. The rover rolled to a stop inside a small, shallow crater roughly 20 meters across and one or two meters deep. Exposed bedrock on the crater walls originated at different times in Martian history, giving scientists a window to the red planet’s past. "We have scored a 300-million-mile interplanetary hole-in-one," said principal investigator Steven Squyres (Cornell University) at a January 25th afternoon press conference. 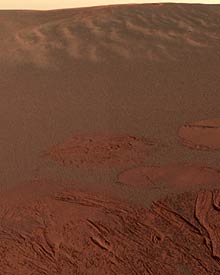 Image processors assembled this mosaic from views taken by Opportunity’s panoramic camera shortly after landing at 12:05 a.m. Eastern Standard Time on January 25th. The rover landed inside a small, shallow crater, and the low wall is clearly visible.

The exposed bedrock lies straight ahead and roughly 10 meters away, within easy reach of the rover. No obvious hazards stand in the way. No rocks or airbags block the main egress ramp, meaning Opportunity won’t have to make turns on the lander before rolling to the surface. "We have been dealt a pretty good hand," says Firouz Naderi, Mars Exploration program manager at JPL.

Opportunity’s cameras and spectrometers are perfectly suited to tell scientists whether volcanic or sedimentary processes created the bedrock. The bedrock is intact and native to the crater, making it much easier to reconstruct the history of the site. In contrast, most of the rocks at the Viking, Pathfinder, and Spirit sites were transported to those regions by volcanoes, impacts, or water flows, and were fragmented by various forces.

Scientists are also relishing the opportunity to study the powdery, dark reddish-gray soil that covers most of the site. "That’s the stuff that we think contains the hematite," said Squyres. Hematite is the reason Meridiani Planum was the science team’s favorite landing site. On Earth, this iron-bearing mineral commonly (but not always) forms in the presence of liquid water. Infrared spectra from Mars Global Surveyor show an abundance of hematite in Meridiani. 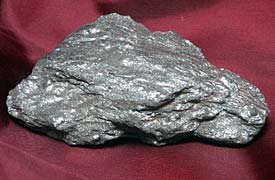 Opportunity’s suite of instruments, particularly its Mössbauer Spectrometer, was specifically chosen to identify related minerals that will tell scientists whether Meridiani’s hematite formed in a lakebed, in hot springs, or by volcanic processes. "If we find the mineral goethite, that would almost be a slam dunk for an aqueous process in a lake environment," said science team member Doug Ming (NASA/Johnson Space Center).

With its absence of boulders and darker soil, the Meridiani site looks totally different from any of the previous four landing sites on Mars. "I think we’re going to roll off and take a look at the soil and then we’re going to head for that outcrop as fast as we can," said Squyres. After that, Opportunity will probably climb out of the crater and head for a larger, 150-meter-wide impact crater about half a kilometer to the east. This larger crater was revealed in images taken by Opportunity’s descent camera, DIMES (Descent Image Motion Estimation System).

Meanwhile, engineers continue to make progress reviving Spirit. Project manager Pete Theisinger admitted that Spirit is still in serious condition, but says it is moving toward guarded condition. "We have a patient that’s well on the way to recovery, and I think we have a very good chance now that we’ll have a very good rover when we get done getting this thing back up. But don’t expect us to be driving for a couple weeks, maybe three," he said.

Spirit’s power and thermal systems remain in excellent condition, its battery is fully charged, the rover has gone to sleep as intended the past two nights, and it is transmitting useful engineering data through its low-gain antenna. Engineers have identified the likely cause of the mishap and are developing procedures to work around it.

The problem appears to be a software glitch in the rover’s flash memory, a type used in digital cameras and other devices to store data when power is turned off. Spirit’s flash memory, which stores and retrieves both scientific and engineering data, was miscommunicating with the flight software, causing the computer to crash over and over again. The leading theory is that controllers overloaded the flash memory’s file management software with too many files that accumulated during the six-month interplanetary cruise and the 18 days on Mars, though engineers have not ruled out the possibility that charged particles from a solar storm caused the glitch.

Engineers have performed successful surgery from 200 million kilometers by bypassing Spirit’s flash memory. They have instructed the computer to boot up using only random-access memory (RAM), and the rover has since responded to commands without crashing. If the flash memory cannot be fully restored, the team will be forced to store data in RAM. Writing data to RAM erases previous memory, so Spirit will have to transmit all of its data to Earth each night before shutting down. "If we can learn to operate in that mode, we can still get all of our science done," says Naderi.

Without question, the computer problem is delaying Spirit’s science activities and cutting deeply into the lifetime of the mission. But because the power system is exceeding expectations, Squyres is confident that Spirit’s batteries can hold out in the harsh Martian environment for significantly longer than the designed three-month lifespan. If so, the rover could still fulfill all of its science objectives and then some. 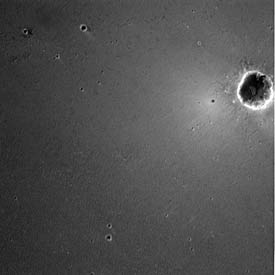 Opportunity’s descent camera, DIMES, took this image from an altitude of 1,404 meters. The rover rolled into one of the small craters near the center of the image. The dark spot just to the left of the large crater is the shadow of Opportunity’s parachute, surrounded by backscattered sunlight. This frame is 1.2 kilometers across.

Engineers are concerned that Spirit’s computer problem might be common to both rovers. If so, they will proceed cautiously with Opportunity, meaning it might take two to three weeks before it egresses. If the problem is unique to Spirit, Opportunity might egress toward the end of its second week on Mars. If the problem lies with too many files in the flash memory, "We will be very conscious of this limit," says Jennifer Trosper (JPL), who chairs the committee that is investigating the Spirit anomaly.

With two functioning rovers 10,600 kilometers apart on opposite sides of the planet, the scientists and engineers have divided into two teams, which are working on different shifts around the clock to service the rovers. Such is the high state of enthusiasm at JPL that one of the jobs of mission managers is to force people to go home and sleep.