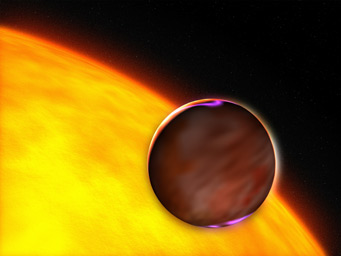 This artist's impression shows a brown dwarf (with intense auroras at its poles) passing in front of a Sun-like star.

Astronomers are unsure how to classify a newly discovered object known as XO-3b. Some say it ought to be a planet, because it orbits close to a star. Others say it's so massive it should be tagged as a brown dwarf — a "failed star." In that case, XO-3b and its sun would comprise something of a binary star system. But did it form that way? Or the way planets do? Whatever the case, the new find challenges ideas on the origin of stellar companions.

The heavy object is more than 12 times as massive as Jupiter, the heftiest planet in our solar system. Once every 3.2 days, it races around its star in a tight, elongated orbit. Astronomer have found many such "hot Jupiters," but XO-3b is by far the most massive. It was discovered by the NASA-sponsored XO project, a collaboration of professional and amateur astronomers using wide-field cameras to monitor the brightnesses of large numbers of stars and watch for slight dimmings caused by planets occasionally crossing their faces.

Team member Christopher Johns-Krull (Rice University) who presented the discovery last week at the American Astronomical Society meeting in Hawaii, notes that XO-3b is on the borderline of being a brown dwarf. These objects are not massive enough to support nuclear fusion of hydrogen in their cores like the Sun does, but being heavier than 13 Jupiter masses or so, they can burn the traces of deuterium (hydrogen-2) expected to be inside them early in their lives.

In contrast, "planets" are generally considered never to have had nuclear fusion at all. And yet XO-3b likely formed in a dusty disk surrounding its host star just like planets do. The brown dwarfs seen floating loose in space are believed to form like normal stars, from the gravitational collapse of an interstellar gas cloud.

"Personally, I believe the formation history should be used to discriminate between planets and brown dwarfs," says planet hunter Jason Wright (University of California, Berkeley) who was not part of the discovery team.

That would avoid confusion in the overlapping mass range expected among objects formed by the two different routes. The problem is that a given object's formation history may never be known.

No matter how XO-3b gets classified, it is a rare beast. Astronomers have yet to see a brown-dwarf-mass object anything like this close to a companion star. In fact, experts refer to the lack of brown dwarfs in close binary-star pairs as the "brown-dwarf desert."

Moreover, given that the orbit of XO-3b is so small, you would also expect it to be circular rather than elongated, due to tidal friction at work. "Maybe we just happen to see it at a time when this circularization process hasn't been completed yet," says Wright. "It's very weird."