Planck and Herschel to Probe Inflation and Starbirth

This morning the European Space Agency successfully launched two new science heavyweights — the Herschel Space Observatory and the Planck Surveyor — onto journeys deep into space, where they will begin their much-awaited missions.

With its far-infrared vision, Herschel will help astronomers learn more of how stars are born today and how galaxies formed in the early universe. Planck will look even earlier. It should help unravel the origin of the universe as a whole by mapping in new detail the microwaves radiated 380,000 years after the Big Bang. 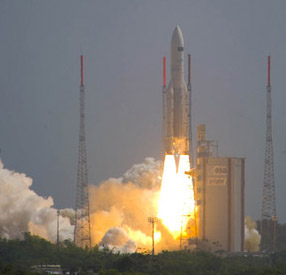 The Ariane 5 rocket carrying Herschel and Planck lifted off from French Guiana at 9:12 Eastern Daylight Time on Thursday, May 14, 2009.

The largest space telescope ever launched, Herschel is designed for deep views at far-infrared wavelengths. Herschel will see the weak thermal emissions from very cold objects with temperatures just 5° to 50° Celsius above absolute zero. Its instruments will work at wavelengths from 55 to 670 microns, the poorly explored part of the infrared spectrum farthest from visible light and closest to microwaves.

From the ground, atmospheric water vapor not only blocks the view in this part of the spectrum, but also re-radiates a diffuse glow that veils the sky.

“That’s what makes it exciting, it’s a new waveband,” says Michael Rowan-Robinson (Imperial College, London) of the Herschel science team. By looking in the far infrared, Herschel will peer through the gas and dust clouds that blanket stars forming in our galaxy and entire galaxies forming in the early universe. This far-infrared vision will provide astrophysicists with unprecedented looks into the earliest stages of star formation. 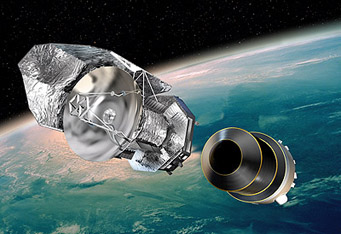 About half an hour after launch, Herschel, left, separated from the launcher's upper stage. (Artist's illustration.)

“This has never been done from space before,” says Göran Pilbratt, ESA’s project scientist for Herschel. From the other side of the spectrum, a radio detector will reach out toward the infrared end of its range. “We are really closing the gap,” says Pilbratt.

Herschel’s 3.5-meter mirror beats the Hubble Space Telescope’s 2.4-meter aperture. However, resolving power decreases with increasing wavelength, so in the far infrared a wide mirror is crucial for seeing with even moderate sharpness. 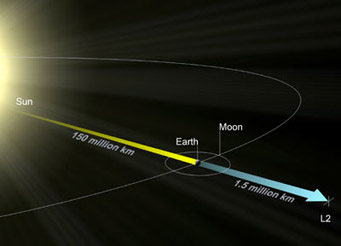 Herschel and Planck will take separate two-month journeys toward L2, the second Sun-Earth Lagrangian point, some 1.5 million km from Earth in the direction opposite to the Sun. For an animated view of Herschel's trip, click here.

But such a large mirror has its drawbacks. Cooling it would require too much supercold fluid. So the onboard liquid helium will only be used to cool the detectors. Even so, the 2,300 liters of liquid helium will be used up in 3.5 years.

Even hidden behind a Sun shield, and four times farther from Earth than the Moon, the mirror and the rest of the telescope should stabilize at a relatively warm temperature of 80°C above absolute zero. At that temperature, the telescope itself emits troublesome infrared glow. Imaging doing visible-light astronomy through a telescope that's shining red-hot. “Most of the signal that you see actually comes from the telescope, not from the sky,” says Pilbratt. “This is the price we have to pay for having such a big telescope.” 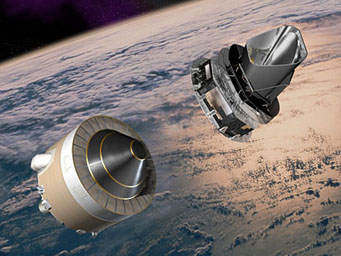 Planck, right, separates from the launcher a couple of minutes after Herschel has departed. (Artist's illustration.)

Planck and the Microwave Background

Herschel’s launch companion, the Planck Surveyor, will compile the most accurate microwave map yet of the whole sky. Planck’s primary goal is to study the details of the cosmic microwave background (CMB). This radiation is the much-redshifted white light from the hot gas that filled the universe 380,000 years after the Big Bang, when the gas was still at a temperature of 3,000° and becoming transparent for the first time as it cooled.

The gas was almost perfectly smooth and uniform, but not quite. There are slight variations in the CMB’s temperature from point to point on the sky. These patterns tell us how enormous acoustic waves compressed and dilated the universe’s contents slightly during its first 380,000 years. By mapping the density peaks and troughs, and their different intensities at different size scales, it’s possible to work backward and learn precise details about the very early universe’s conditions and composition.

Planck will map temperature differences of only a few parts in a million, achieving a sensitivity some 10 times greater — as well as about three times better angular resolution — than its predecessor, NASA’s epoch-making WMAP satellite. 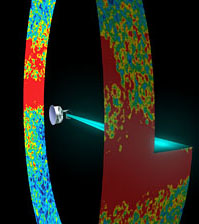 Planck will scan the entire sky to build the most accurate map ever of the cosmic microwave background (CMB), the relic radiation from the Big Bang. Planck will take about 6 months to complete one full scan of the celestial sphere. It should finish two by the end of its 15-month lifetime.

In particular, Planck will also record the polarization of CMB photons. In today's standard model of cosmology, the extremely early universe experienced an incredible growth spurt known as inflation, expanding by perhaps 1026 times or more in just 10–32 second. In its simplest version, inflation should have produced gravitational waves, which should impart specific patterns on the CMB polarization known as "B modes." Detecting these B modes would clinch the case for inflation.

This would also narrow down how inflation worked. There are many variants of inflation models, and as theorist David Spergel (Princeton University) of the WMAP science team explains, many of the popular models predict gravitational waves. And these could be strong enough for Planck to see. “We have a well-defined target to go for, and Planck will be sensitive to that range,” says Spergel.

Even if Planck does not see the effects of gravitational waves, that doesn’t mean inflation is ruled out. Some versions of inflation would not have created any B modes, or they would be too weak for Planck to detect. In that case, it will require a next-generation CMB mission to rule out inflation.

Update, May 15th: The two telescopes are both safely on their way toward L2. Here's an ESA update press release with movies.

The Big Bang and Inflation are not real. They are mathematical fictions created by model oversimplification. For a model of the universeâs expansion and acceleration that employs no supernatural forces, see http://www.dark-energy.org

The Big Bang and Inflation are not real. They are mathematical fictions created by model oversimplification. For a model of the universeâs expansion and acceleration that employs no supernatural forces, see http://www.dark-energy.org

Folks need to remember that inflation was developed around 1980 to solve the horizon problem â the light-travel time problem in the big bang model concerning the smoothness of the cosmic microwave background radiation (CMBR) where 3D space expands >> c, only shortly after the inflation epoch to slow down. No one has measured 3D space expanding faster than c in the physics labs. Without this patch to the big bang model, the explanation for the origin of the CMBR falls apart.