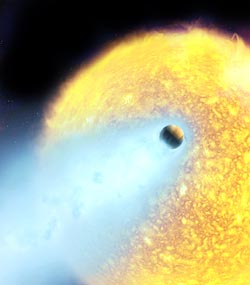 The planet that transits across the face of the star HD 209458 is shedding a huge cloud of hydrogen. (At visible wavelengths the hydrogen is completely transparent, unlike in this artist's illustration.) Animations are available on the researchers' Web site.

Courtesy ESA, A. Vidal-Madjar, and NASA.

Astronomers are witnessing the evaporation of a planet. HD 209458b, a gas giant racing closely around its star every 3.5 days, is losing at least 10,000 tons of hydrogen per second. The reason: its atmosphere is being puffed up by the nearby star's scorching heat. Eventually most of the planet may completely disappear, according to Alfred Vidal-Madjar (Institut d’Astrophysique, Paris) and his colleagues.

HD 209458b was the first exoplanet found to be transiting across its star, a near twin of the Sun 150 light-years distant in Pegasus known as HD 209458. Once per orbit, with clockwork precision, the star’s brightness dips by 1.5 percent as the planet crosses its face. The amount of dimming indicates that the planet is 1.3 times as large as Jupiter. But when Vidal-Madjar and his colleagues used the Hubble Space Telescope’s Imaging Spectrometer (STIS) to observe the star at an ultraviolet wavelength of 121.57 nanometers (the Lyman-alpha absorption line of atomic hydrogen), they detected a staggering 15 percent intensity drop during transits. Clearly the planet's hydrogen profile is vastly larger than the planet itself.

In the March 13th issue of Nature, the team argues that the absorption is due to an extended hydrogen atmosphere of the planet some 600,000 kilometers in diameter, roughly three times the planet's diameter. Moreover, some of the gas trails asymmetrically behind.

Since this is substantially larger than the planet's Roche lobe (the region dominated by the planet's gravity), part of the hydrogen must be flying off into space. A Doppler shift in the transit observations indicates that most of the hydrogen atoms are rapidly moving toward us, just as you would expect if the star were blowing the gas away in a cometlike tail.

"This is a very interesting find," comments Andreas Quirrenbach (Leiden Observatory, the Netherlands). "It shows that we still can learn quite a bit of physical details about these planets, even though we’ve never observed one directly." According to Quirrenbach, some models had predicted hydrogen loss from hot Jupiters, as these close-in exoplanets are called. But no one really knew whether such planets should lose mass or not, because modelling the upper parts of an irradiated gas giant is quite difficult. Though he finds the discovery impressive, he warns that the results need independent confirmation.

Vidal-Madjar and his colleagues suggest that the evaporation mechanism might explain the lack of exoplanets in orbits smaller than some 7 million kilometers — they would just go up in smoke. Quirrenbach notes that a number of other proposed explanations, based on dynamical arguments involving the inward migration of planets, can also explain this lack. "But this is not well understood," he says, "so there may be room for an alternative explanation."