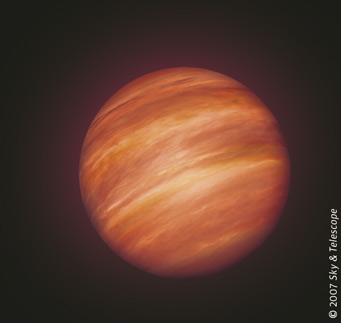 Recent observations show that perhaps as many as one-half of hot Jupiters (depicted in the artist rendering above) have larger
sizes than theory predicts. The explanation for this anomaly is still unknown.

Astronomers have confirmed 14 exoplanets that transit their host stars. All of these worlds orbit their suns at very close distances, and thus are heated to high temperatures. Unlike other exoplanets, transiting bodies enable observers to measure their masses and diameters, which in turn yield their densities.

As of a few months ago, the transiting planet HD 209458b in Pegasus stood out like a sore thumb. Despite being only 70% as massive as Jupiter, its diameter is 35% greater, which is much larger than theoretical models predict for Jupiter-mass planets in tight orbits. But recent observations suggest that at least three other recently discovered transiting exoplanets are also puffed up like HD 209458b.

In September 2006 Gáspár Bakos (Harvard-Smithsonian Center for Astrophysics) and his colleagues discovered the transiting exoplanet HAT-P-1b, which has a diameter 35% greater than Jupiter's (December issue, page 22). Groups led by David Charbonneau (also at Harvard-Smithsonian) and Avi Shporer (Wise Observatory, Israel) found that the planet WASP-1b has a diameter about 40% larger than Jupiter's. A European team led by Frederic Pont (Geneva Observatory, Switzerland) finds that two planets discovered by the Polish Optical Gravitational Lensing Experiment have diameters about 30% larger than Jupiter's (though another group disputes one of these findings).

"Inflated Jupiters are common," says Charbonneau. "Four or five out of 14 are way too large given their masses." 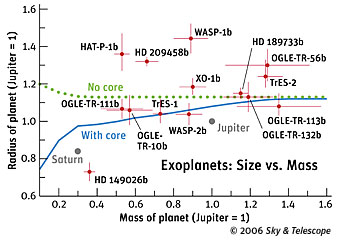 This graph plots the masses and radii of 14 known transiting exoplanets, along with Jupiter and Saturn. At least three planets, and possibly as many as five, have radii that are much larger than theory predicts. The lines represent theoretical models for close-in planets with a 20-Earth-mass core and with no core. Click on image for larger view.

In 2005 Joshua Winn (now at MIT) and Matthew Holman (Harvard-Smithsonian) developed a model that could explain HD 209458b's low density. In rare circumstances, they noted, a massive planet could park itself in orbit around its host star while being tipped on its axis, giving it a high obliquity. In this configuration, the star's gravity raises a tidal bulge in the planet's atmosphere that sloshes north and south every orbit, injecting heat into the interior that inflates the planet.

But Winn and Holman also noted that only a rare set of circumstances would allow a close-in planet to exist in a high-obliquity state, which worked fine when only one low-density world was known. But Winn now concedes, "My guess is that with 4 out of 14 puffballs, obliquity tides are not the correct explanation. Instead, I think we're missing something fundamental about the interior structure or atmospheres of hot Jupiters."

Charbonneau adds, "We have a definite puzzle in need of an answer. There is an additional energy source that we haven't yet identified."