Covered in cracks and dirty patches, Europa's ice shell may have pockets of liquid water just beneath the surface that drive the formation of regions called chaos terrains.

Astronomers have detected faint emission above the Jovian moon’s southern hemisphere that might be from water vapor spewing from the surface, Lorenz Roth (Southwest Research Institute and University of Cologne, Germany) and colleagues reported December 12th at the American Geophysical Union meeting. The result also appears in Science.

This detection is not the first of potential activity. “The history of apparent plumes on Europa has been somewhat of a sordid one,” says planetary scientist Robert Pappalardo (JPL). Both Voyager and Galileo have seen hints that were later dismissed (one was a ghost image from a previous exposure). A thermal observation from a couple of decades ago also suggested an outburst but couldn’t be reproduced, he adds.

But with a liquid water ocean beneath its peculiar crust, Europa could have plenty of fuel for eruptions. Plus, features in the region Rhadamanthys Linea look kind of like those from fissure eruptions in Hawaii and Iceland, Pappalardo says.

And of course there’s the parallel with Saturn’s little moon Enceladus, which coughs out enough water vapor from its south pole to form the planet’s E ring. 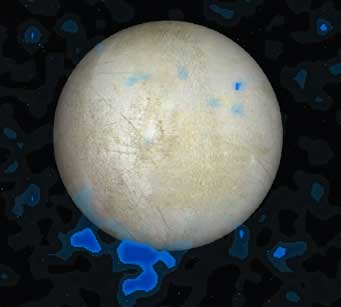 This composite image combines smoothed Hubble Space Telescope ultraviolet data (blue) with a visible image of the leading hemisphere of Europa. Emission from hydrogen and oxygen suggests that plumes of water vapor are erupting from the moon's surface.

Roth and his colleagues pointed the Hubble Space Telescope at Europa to follow up on tantalizing (but inconclusive) 2009 observations. They took ultraviolet spectra of the moon’s tenuous envelope in November and December 2012, timing their observations so that they could easily subtract out other signals moving through the Jupiter system’s harsh radiation environment. They also focused on two important times in Europa’s orbit: its closest and farthest approaches to Jupiter, also known as periapse and apoapse.

From watching Enceladus, scientists expect plume activity to be higher at apoapse. When an icy moon like Enceladus or Europa is close to its planet, the tidal forces stretch and squish it, closing up any cracks in its surface, researcher Francis Nimmo (University of California, Santa Cruz) said at the press conference. But when the moon moves farther away, it becomes “unsquished,” opening the cracks. These open cracks could expose liquid water to the vacuum of space, causing it to boil off as temporary plumes.

Roth’s team found that at apoapse, emission from oxygen atoms above Europa’s south polar region was about three times brighter than the average elsewhere, while hydrogen was at least nine times brighter. The signals were absent during the November periapse, and also in a second periapse observation from 1999. 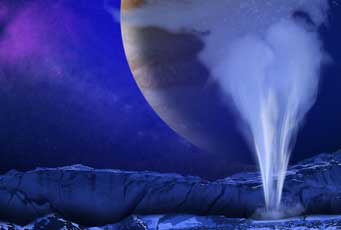 Artist's illustration of a plume of water vapor erupting from the icy surface of Jupiter's moon Europa. New Hubble observations provide the best evidence yet that such plumes do in fact exist at the moon's south pole.

This is great: it gives scientists a clear scenario to test. If more observations confirm the uptick in hydrogen and oxygen at apoapse, it will be solid evidence for transient plumes on Europa.

“I’ll sleep better knowing that it’s been reproduced,” Pappalardo admits. Seeing the signal in the same wavelength would be convincing, but it’d be even better if observers could catch infrared emission from warmed material, he adds. “I guess I’m 70-ish percent sure now, based on what I see. I bet if they did it again I’d be 90% sure, and then I’d be up at 100 if I saw the infrared.”

Roth and his colleagues are also cautious. Based on the emission, the team thinks it could come from plumes 200 kilometers (125 miles) tall, spitting out 7 tons of material each second. (Yeah, the team was surprised, too.) That’s 35 times higher than the rate at Enceladus, although the expected plume densities are similar.

Even though the team expects that eruption velocities might hit 700 meters per second (1,500 mph), Roth noted that the vapor won’t reach escape velocity. Instead, it’ll rain back down on the moon, freezing immediately on the -150° C (-240° F) surface, he explained. The whole process would take about 20 minutes.

For now, the only images of Europa’s pole are partial ones from the Galileo spacecraft, which visited the Jupiter system from 1995 to 2003. But the resolution of those images is maybe 100 km per pixel at best, not enough to look for signs of fallout, James Green (NASA Planetary Sciences Division) said during the conference.

Pappalardo and others are working on a Europa Clipper mission concept, which could potentially fly through a plume (if they exist) and study it. NASA hasn’t yet selected the idea for development as a future mission, in part because the clipper would be a flagship-class mission (a.k.a. more than $1 billion U.S.), and the current budget climate won’t allow it. It’ll have to wait until later in the decade.

Wow. Now I hope that some people at JPL sit around a table and discuss a mission à la Stardust, that flies a particle collector filled with an aerogel directly through a plume and sends the samples back to Earth. This is our best chance to possibly detect life on another celestial body. Europa probably has more ocean than the Earth, and if microbial life forms easily, its traces should be abundant in the whole body of water. I suppose any drop of water from Earth's oceans contains large numbers of microbes and perhaps a drop of water from Europa in a terrestrial lab would tell us more about life on this moon than a cryobot melting down through the ice, which is technically extremely challenging and the analysis capabilities of which are rather limited. I would love to see this mission happening in my lifetime. I'm almost 50. Wasn't NASA looking for missions that require the new SLS heavy lifter? There you go...

Dieter Kreuer’s suggestion is good, but to insure the successful capture of material ejected from Europa’s liquid layer more that just a few infrequent flybys would be needed. Flyby missions are in the works, such as ESA’s JUICE mission, but to catch transient plumes in action would require an orbiter for an extended period in an alterable polar orbit so that the craft could be directed into a plume(s), preferably more than once and at more than one altitude. Some have also raised concerns about not contaminating Europa with microbes from Earth, which can be pesky hitchhikers on our probes. so it would be great if possibly organic samples could be collected without even needing to touch the moon’s surface or drill into it.