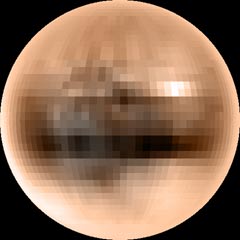 This true-color map shows how Pluto's surface varies in reflectivity. Eliot Young and his colleagues created this map from data obtained at the McDonald Observatory in Texas during periods when Pluto was being partially eclipsed by its moon Charon. Because the two worlds are tidally locked, the map only shows Pluto's Charon-facing hemisphere.

After Clyde Tombaugh discovered Pluto in 1930, the planet drew considerable scrutiny. Unfortunately, modern analysis shows that many Pluto observations from the 1930s and 40s were unreliable. Measurements of Pluto's brightness made from photographic plates were off by as much as 1 magnitude because of errors in measuring the brightnesses of comparison stars. Only with the introduction of photoelectric photometers in the 1950s could astronomers produce measurements of Pluto's changing reflectivity (light curves) that are accurate by modern standards.

But astronomers would like to know Pluto's true brightness during those earlier times. Luke T. Smith and Bradley E. Schaefer (Louisiana State University) have reexamined photographic plates of Pluto taken with several different telescopes in 1933-34. By using modern equipment to make more accurate measurements of stars images on the same plates, and by measuring the brightnesses of these stars with a telescope in Chile, Smith and Schaefer have produced an accurate light curve for the planet in the years shortly after its discovery.

The two astronomers then compared Pluto's brightness to models developed by Marc W. Buie (Lowell Observatory). "We thought Pluto would be brighter than it actually was," says Smith, whose presented the results at last week's American Astronomical Society conference in Minneapolis, Minnesota. After accounting for Pluto's greater distance from the Sun in the 1940s and Earth's viewing geometry, Pluto turns out to be 0.05 magnitude (5 percent) dimmer than Buie's model predicts.

The key to explaining Pluto's faintness during this period probably lies in the planet's unusual spin axis, which is tipped by 120 degrees relative to the plane of Pluto's orbit. In the 1930s, Pluto's southern hemisphere was pointed almost directly toward the Sun, whereas in more recent decades, Pluto's equator has been aimed toward the Sun. In 1933-34, Pluto was approaching the Sun on its highly eccentric orbit at a distance of 40 astronomical units. With the planet's southern hemisphere basking in perpetual sunlight, frosts of volatile compounds such as methane probably vaporized to form a rarified atmosphere, and then condensed on the darker and colder northern hemisphere, which was hidden from view. With less ice on its Sun-facing side, Pluto would have grown slightly darker. 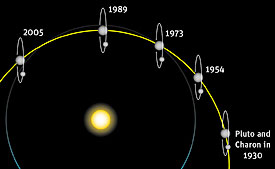 As Pluto orbits the Sun, it shows different faces to Earth, which partially accounts for its changing brightness. But Pluto's highly eccentric orbit also causes significant brightness changes. When Pluto comes close to the Sun, it sprouts an atmosphere. The gases freeze back on the surface of Pluto and its moon Charon when Pluto is far from the Sun. The relative sizes of Pluto's orbit around the Sun and the Pluto/Charon orbit are not to scale. Click on the image to view a full-scale version of this diagram.

"This is the only way to study Pluto that far back," says Schaefer, who notes that this work is still ongoing. "Pluto's surface would have been different, and now we're starting to get a handle on that."

"We have seen implications of atmospheric changes from frost formation and vaporization directly as changes in its light curve," adds Smith. "We know Pluto has an atmosphere, but there's a lot of work to understand how Pluto's atmosphere changes."