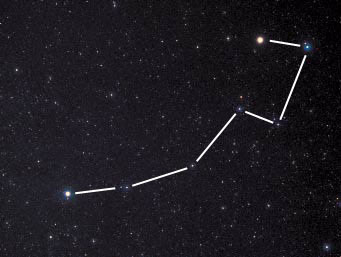 Polaris (lower left) shines at the end of the handle of the mostly-dim Little Dipper — which is oriented here the way it appears shortly after dark in late April and early May.

Polaris is important not just because it's the North Star. It also happens to be the brightest and nearest Cepheid variable star, 430 light-years away. Cepheids, a special class of pulsating giants, have provided astronomers with a crucial link in the cosmic distance scale for almost a century. But Polaris isn't just any Cepheid. It has been changing its period and especially the amplitude of its pulsations.

Polaris varies in brightness only slightly, by just a few percent across its 3.97-day cycle. Moreover, the pulsations steadily diminished for decades: from 0.12 magnitude per cycle a century ago — almost enough to see by eye — to a mere 0.02 magnitude per cycle in the mid-1990s. Astronomers wondered if Polaris was about to stop pulsing completely.

Apparently not. Four years ago Edward F. Guinan (Villanova University) and several colleagues reported that Polaris's fluctuations bottomed out in the mid-1990s and had started increasing again, to 0.038 magnitude per cycle in 2004. Now an international team of nine astronomers finds the trend continuing. From 2003 to 2007, says the team, Polaris's brightness pulsations increased by an additional one-third.

The group used instuments aboard satellites to monitor Polaris almost continuously for 4.5 years. Based in this very high-quality data, they suggest that Polaris is not evolving away from the "instability strip" due to long-term, one-way stellar evolution as astrophysicists thought, but instead is showing some kind of centuries-long, periodic behavior and no evolution at all.

So the mysteries of the North Star continue. The group's paper will appear in the Astrophysical Journal.. You can read it as a preprint on the Astro-ph preprint server, which has been taking over from traditional journals as the main place where astronomy researchers share their news.