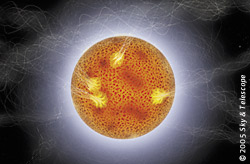 This illustration represents how a magnetar might appear if we could view it up close with X-ray vision. But this is not something you'd want to do. Magnetars are neutron stars with magnetic fields so powerful that they could kill a person from 1,000 kilometers away by warping the atoms in living flesh. Magnetars can also unleash powerful flares that would pose a threat at much larger distances.

On December 27, 2004, astronomers were stunned when more than a dozen spacecraft picked up a powerful burst of gamma rays from the other side of our galaxy. For two-tenths of a second, it doused Earth with a higher rate of energy than any previous observed object outside the solar system. The culprit was a highly magnetized neutron star — a magnetar — known as SGR 1806–20.

Fortunately, astronomers didn't have to wait long for their next magnetar giant flare. On November 3rd, at least six spacecraft picked up a powerful burst of gamma rays coming from an area in Ursa Major in the general direction of M81 and M82, two relatively large galaxies located about 12 million light-years away. Most of the flare's energy was packed into a pulse lasting just one-tenth of a second. If the burst originated in M81 or M82, the total energy and spectrum closely resemble the December 2004 giant flare from SGR 1806–20.

"All evidence is consistent with the interpretation that this was a magnetar flare in the M81 group of galaxies," says Robert C. Duncan (University of Texas, Austin), who along with Christopher Thompson (Canadian Institute of Theoretical Astrophysics) first conceived of magnetars in the early 1990s. 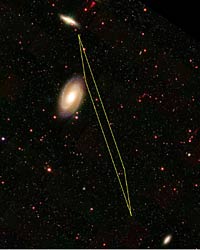 This wide-field image from the Sloan Digital Sky Survey includes the relatively nearby galaxies M81 (slightly above center) and M82 (top center). On November 3, 2005, six spacecraft in the interplanetary network detected and localized a short burst of high-energy gamma rays coming from somewhere near or within the marked area of uncertainty. This zone is so close to M81 and M82 that the source is probably in one of these galaxies or in a dwarf galaxy in the same cluster.

"Nearby galaxies like M81 and M82 are so rare in the sky, and the energetics of the flare are so well suited to it being at M81's distance, that we are definitely taking the M81/M82 possibility very seriously," adds Daniel A. Perley (University of California, Berkeley). He calculates that there is only a 3 percent probability that an event like the November 3rd burst would occur so near a bright galaxy such as M81 or M82 merely by chance.

But Perley's Berkeley colleague Kevin C. Hurley stresses that the area of uncertainty also includes much more distant galaxies. "While the burst profile does resemble a magnetar giant flare, we still can't prove that this is an extragalactic magnetar flare," he says. "I do believe that extragalactic magnetar flares are out there, and I'm as anxious as anyone to find the first one. But I think we need to be cautious about claiming victory."

If further analysis confirms that the event is a giant magnetar flare in M81 or M82, it will be a major boon to scientists. With just one observed outburst of this magnitude (the December 2004 event), astronomers couldn't say how often magnetars unleash such stupendous flares. But taken together these two flares suggest that such blasts occur once every few decades in a large spiral galaxy such as the Milky Way.

This light curve from the Russian/American Konus-Wind satellite shows that most of the gamma rays from the November 3rd event arrived in less than 0.1 second. This pattern closely resembles that of a giant magnetar flare observed on December 27, 2004.

They also provide a connection to gamma-ray bursts (GRBs), powerful explosions emanating from deep space. About one in six GRBs have durations less than 2 seconds; these are collectively known as short GRBs. In just the past few months astronomers have collected powerful evidence that most short GRBs are triggered by the merger of two neutron stars or a neutron star and a black hole in distant galaxies. (Most astronomers think that long GRBs occur when the cores of massive stars collapse to form black holes.)

But magnetar giant flares, with their short but intense pulses of gamma rays, appear to be another class of short GRBs. After the December 2004 giant flare, astronomers immediately realized that if that event had occurred in a relatively nearby galaxy, it would have looked similar to a typical short GRB. The occurrence of two magnetar events in less than a year suggests that about 10 to 20 percent of short GRBs could be extragalactic magnetar giant flares, though astronomers have not observed enough of them to gain a firm handle on the statistics. As Hurley states, "It's all very speculative at this point."

Magnetar giant flares are presumably triggered when magnetic-field lines within the star stress the thin crust past its breaking point, causing a sudden, large-scale crustal shift that allows field lines outside the star to rearrange themselves into a lower-energy state. This powerful "starquake" transforms huge quantities of magnetic energy into gamma rays and subatomic particles. 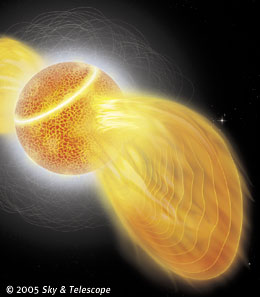 This illustration depicts the highly agitated state of a magnetar moments after a massive starquake. The hot surface stripe is due to large-scale shifting and turning of the solid crust. Magnetic-field lines outside the star trap charged particles of matter and antimatter, which mutually annihilate to produce high-energy radiation.

NASA's Swift, HETE-2, RHESSI, and Mars Odyssey spacecraft, the European Space Agency's Integral satellite, and the Russian Konus-Wind satellite detected the November 3rd burst. Astronomers are also studying data from a short GRB picked up on September 6th, which might have been a magnetar giant flare in the much more distant galaxy IC 328 in Eridanus.