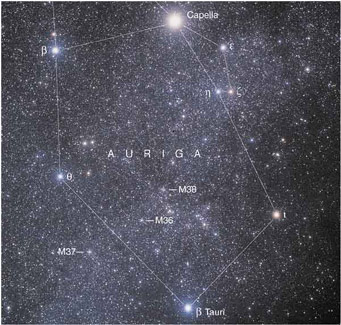 Epsilon Aurigae is located at the top right in this image of the constellation Auriga. Click on image for larger view.

Most cosmic cataclysms are unpredictable. But today at the American Astronomical Society's meeting in St. Louis, Robert Stencel (University of Denver) went out on a limb and predicted an upcoming stellar "doomsday event," possibly within the 21st century. Observations made by professional and amateur astronomers during the upcoming, once-in-a-generation eclipse of Epsilon Aurigae may reveal whether or not the star is heading for extinction.

Epsilon Aurigae is a third-magnitude F-type supergiant star located in a group of three stars nicknamed "the Kids" within the constellation Auriga, the Charioteer. It is known to be an eclipsing binary with a two-year-long eclipse that occurs every 27 years.

But such a long eclipse means the secondary object isn't a star. The eclipser is thought to be a 12- to 14-solar-mass disk of matter some 10 astronomical units across. What makes this particularly interesting is that the disk is invisible. Such a large disk needs a central object (or objects) to stabilize it over the long term. The stabilizer isn't visible, either.

According to Stencel, the composition of the disk also remains unknown. Observations by the Infrared Astronomical Satellite (IRAS) gave an estimate of a 400º-Kelvin surface temperature for the disk. Spitzer also looked but saw nothing. The F supergiant dominates everything and the secondary doesn't show up in spectra taken of the system.

But there's more. The primary star has a slight oscillation in its light level. Ten years ago the oscillation was on a 95-day cycle; today it's 67 days from peak to peak. If this decline continues unabated, the variations will become very rapid within the next six decades.

The real trouble is that Stencel isn't certain what sort-of doomsday event might occur because nobody is certain what's going on within the system. Is the disk accreting more matter from the primary star? Stencel noted that when high rates of accretion occur in other systems, some kind of heating usually takes place and cataclysmic events often follow.

If that's the case, high-energy phenomenon should appear within a few decades, but it's not clear exactly what form that might take. Perhaps the upcoming eclipse, beginning in the second half of 2009, will reveal some of Epsilon's secrets.

Maybe the eclipser is a Dyson sphere.

That person who keeps asking if it is in Seattle

A 10 AU Dyson sphere? That would be pretty cool.

A Dyson Sphere is the result of an advanced civilization taking apart a planet and redistributing it so as to form a spherical surface around a star. The inside makes one enormous living surface which absorbs all available radiation (or most of it). In theory, if the sphere were complete all the star's radiation would be absorbed. Holes are possibe. All sounds like SiFi, but Black Holes sounded the same way in the 11930's! Dark Matter and energy are stranger than SiFi!