As demonstrated this week during a gathering of observers in Big Bear, California, amateur and professional astronomers are joining forces as never before. 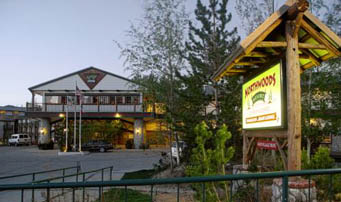 Astronomy is one of the few pursuits in which it's sometimes hard to tell an amateur from a professional. Certainly anyone walking into this year's Symposium on Telescope Science, held jointly with the American Association for Variable Star Observers, could easily mistake those gathered for a cadre of academics. But with the advent of affordable, high-quality technologies, such as CCD cameras, and the growth of large collaborations, amateurs are increasingly doing hardcore science that is indistinguishable in quality from professional work. Often they are partnering with professionals, too.

One such pro-am project that has impressed participants here focuses on the eclipsing binary star system YY Geminorum. This pair of small, cool M dwarf stars is only 71 arcseconds from Castor and 7.5 magnitudes dimmer than the brilliant Twin, making the binary incredibly difficult to observe. Leslie Hebb (Vanderbilt University) wanted to see if magnetic activity, such as that which creates star spots, could explain why the stars are larger than expected. However, the extensive observations she needed to map the stars' magnetic fields, as well as how often they flare, whether they have spots, and how their brightness varies, would take too much time on in-demand professional scopes. 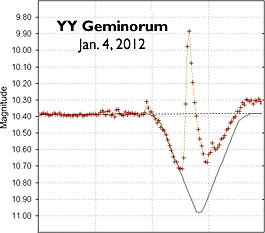 The abrupt spike in this 4-hour-long light curve is a flare that brightened the variable star YY Geminorum by 0.8 magnitude.

So she turned to amateurs for help: she attacked the magnetic-field question with the 3.6-meter Canada-France-Hawaii Telescope in Hawaii, while nine amateurs from around the world attacked the other questions by closely observing the binary's light.

The results of the amateurs' observations, completed over the same time period as Hebb's, show that YY Gem flares a lot — the amateur team recorded 20 flares over the 10-day-long intensive observing run — and also suggest that the stars have star spots. As Utah-based observer Jerrold Foote told attendees, it's too soon to say whether this high activity explains the stars' apparent beefiness. But the ingenuity required to observe the system, the quality of the data, and the observers' crucial role make the project an exquisite example of pro-am collaboration. 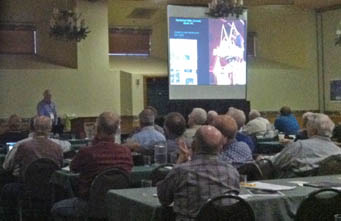 Attendees listen to a presentation during the 31st annual Symposium on Telescope Science.

YY Gem isn't the only cool pro-am project being presented here. A 20-year campaign to study the behavior of the cataclysmic variable BK Lyncis, a binary system with a white dwarf stealing material from its companion, revealed that it might be the only known example of a system transitioning from a nova (when hydrogen fusion reignites on the white dwarf's surface) to a dwarf nova (when accreting material collapses onto the dwarf).

This switch appears to be just one phase of a much longer process of outbursts, and it might explain the existence and rarity of a class of variable stars typified by ER Ursae Majoris.

Other presenters have already showcased efforts to spot meteors hitting the Moon, to look for signs of interacting galaxies, and to make asteroid parallax measurements perfect for teaching students about the solar system — it all makes you wonder if "amateur" is really a fair designation.

IMHO, any amateur astronomer that does this type of work should get some financial compensation for their efforts in order to defray costs of acquiring and operating their equipment. Sure, it is an ego boost to have your name included in the credits on the paper, but it is unfair not to get a part of the grant money that comes to conduct the research.

I have seen this disparity during years of doing astronomy outreach. At uncompensated gigs it is understood that nobody gets paid for their work. But if ANY money is paid to the organizer for the outreach event then the telescope operators working for that organizer should be paid.

"...it all makes you wonder if "amateur" is really a fair designation."

Well, that depends on what definition of the word 'amateur' one uses to describe these individuals.

"Amateur" may carry a connotation of "inferior" for some people but that should not always be the case when referring to amateur astronomers. Astronomy is one of the few sciences where amateurs can do serious, professional-quality work with privately purchased and operated equipment. Amateurs are free to use their equipment for observations every clear night, while access to professional equipment is limited. This can be a huge advantage for photometry when an object can be studied by an amateur for a hundred or more nights per year, while access to professional instruments may be limited to a couple of weeks per year.

As a bit of an aside, the Thursday evening banquet speaker was Dava Sobel, whose talk was based on her recent book, "A More Perfect Heaven: How Copernicus Revolutionized the Cosmos." A highlight was a reading of a passage from her play, "And the Sun Stood Still" between Rheticus and Copernicus performed by herself and her brother Steve.