By decoding chemicals in ancient meteorites, scientists have found that the gaseous body that eventually became the Sun was glowing brightly more than 4.5 billion years ago — chemically changing the material from which our solar system was born.

Astronomers think that the Sun and its planets, moons, and asteroids all formed from a rotating gas disk known as the solar nebula. Unfortunately, astronomers know very little about this epoch; the surrounding material that would later become the planets and moons is thought to have melted and solidified several times, leaving very few hints to help decipher the conditions that bore our solar family. 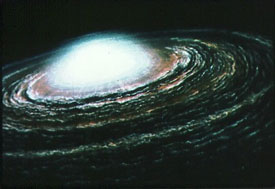 In this artist's visualization, the still-contracting gaseous body that became our Sun flooded its surroundings with ultraviolet light capable of altering chemicals in the surrounding solar nebula — the dusty cloud from which the planets, moons, and asteroids formed.

However, University of California, San Diego researchers Vinai K. Rai, Teresa L. Jackson, and Mark H. Thiemens think they have decoded one of the few hints to survive the solar system's turbulent birth. In today's issue of Science, the scientists describe how they used some of the oldest known meteorites to measure the amount of ultraviolet radiation the protosun poured into its surroundings. By measuring the abundances of key chemical isotopes, the team has uncovered evidence that ultraviolet light flooded the area where the meteorites formed. More indirectly, they also inferred that a high-energy solar wind existed before the planets formed.

"There are two possible scenarios; one is to make the Sun, and make the planets, then switch on the Sun," explains Thiemens, "or switch on the Sun first, and have the planets form out of material exposed to sunlight." In the latter case, the protosun would chemically shape the solar system by emitting enough ultraviolet energy to bake the surrounding matter. The resulting photochemical reactions might create complex molecules — including organic ones.

Applying a laboratory technique developed to Earth's atmosphere, Thiemens and his fellow chemists found that ultraviolet light from the Sun has left a unique signature of chemical change in meteorites: the abundance of isotope sulfur-33. Using this indicator, the scientists inferred the presence of a protosolar wind of particles and gauged the protosun's ultraviolet intensity. "These meteorites are telling us that the [ultraviolet] light from the Sun was doing chemistry in the solar nebula," says Thiemens, "and this ultimately shortens the timescale of organic [compound] formation in the solar system." 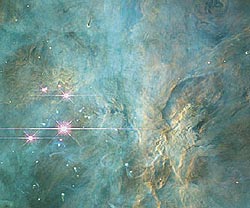 It's entirely possible that other stars or protostars may have shone brightly in the vicinity of the solar nebula. "It's at least as likely that these chemical reactions could have occurred from a nearby massive star," says Arizona State University expert Steven Desch. Most stars form in clusters, and ours may not have been any different. Might the ultraviolet light affecting the solar nebula's chemical composition have originated from a once nearby luminous star? Hot, massive O-type stars "put out half of their radiation in ultraviolet light," says Desch. Put one a few light-years away, he says, and you'll feel its effects.

But the bulk of evidence, says Thiemens, makes this very unlikely. "The pervasiveness of the sulfur isotope makes it very difficult to do this chemistry with only background radiation."