Earth may be going steady with the Moon, but it has a bit of a wanderer’s relationship with some other nearby objects. A study by an international trio of scientists suggests that, at any given time, there is at least one meter-sized mini asteroid temporarily orbiting our planet. Caught from the population of near-Earth objects (NEOs), the “satellite” completes on average three whirls around us in less than a year before the planet and meteoroid go their separate ways. 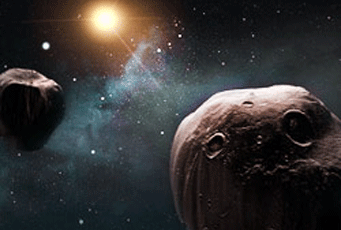 Earth may regularly catch and release nearby meteoroids as temporary satellites.

The results, to appear in Icarus, are based on supercomputer simulations; no real asteroids were involved. But the conclusions match a real temporary satellite seen a few years ago, 6R10DB9 (also known as 2006 RH120), which made a handful of orbits in 2006 and 2007 before sailing back out to circle the Sun again.

The simulations are complex — kind of like estimating the paths of all passengers in a major international airport, explains Tomasz Kwiatkowski (Pozna? Observatory, Adam Mickiewicz University), who was not involved with the study but observed 6R10DB9 during its brief visit. Knowing all the incoming and outgoing flights, as well as the roads feeding into the airport, researchers can calculate the passengers’ various paths. That means the model gives, for a specific moment in time, the positions and velocities for all passengers (read “NEOs”) being considered. While the results are only valid big-picture-wise, the resemblance with 6R10DB9 is neat.

The temporary satellites are most often caught and released in late January or late July — just after Earth reaches its closest or farthest distance from the Sun, respectively (yep, Northern Hemisphere people, Earth is closest to the Sun in January. I know, it’s weird). The preference appears to be a geometric one: the objects have similar orbits to Earth’s, and these times are when the longitudes of the NEOs’ closest and farthest points from the Sun cross Earth’s, meaning that their velocities relative to Earth are fairly small. Earth picks up the bodies near two of the shallow gravitational wells called Lagrangian points, regions of stability created by the Sun-Earth system. In this case, L1 (the dip directly between the Sun and the Earth) and L2 (the one on the exact opposite side of this Sun-Earth line) are the culprits. It’s here that the bodies move basically side-by-side with Earth, making them easy to catch.

But there’s an odd dearth of objects captured from orbits too much like our planet’s (that is, near-circular paths with a radius of just about one astronomical unit). It seems these rocks can’t come close enough to the Earth-Moon system to be caught in a full revolution. 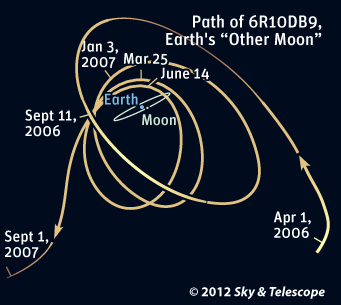 Asteroid 6R10DB9 made several loops around Earth before it meandered off again. The four dates nearest Earth are those of successive perigees. This plot is based on an ephemeris generated by the Jet Propulsion Laboratoryâ€™s Horizons software.

Once released, the fickle meteoroids go back to much the same location from whence they came, meaning that the same body could be snatched and released repeatedly.

Why don’t any of them stick around and become real satellites? The Moon scares them off. Although our lone lunar companion’s presence may help Earth catch a wider range of objects, particularly ones moving faster, it makes long-lived orbits unstable. The problem is similar to “a guy who is great at keeping a meter-long stick on his finger when staying [still] or walking,” Kwiatkowski says. “On a bus doing a zigzag, he is without chances.”

Spotting these visitors from orbit predictions would be great, but that’s a tall order for something so small and faint. Kwiatkowski notes that 6R10DB9 had a visual apparent magnitude of about 19 when it was discovered in late 2006, and it faded to 20.5 in ten days’ time. Still, it could happen. Study coauthor Mikael Granvik (University of Hawaii, Honolulu, and University of Helsinki) suspects a higher frequency of discovery will have to wait for new instruments, such as the planned Large Synoptic Survey Telescope.

You can watch a simulation of another temporary satellite, J002E3, on the Near Earth Object Program's website.

This story hold a special interest for me. Way back in the last century ('82 or '83) I was perusing orbits around the Lagrange points L4 and L5. They look like elongated tadpoles in a rotating frame reference. The widest of these orbits went all the way to L3 and approached Earth at the Hill sphere, which is quite close. As I looked I thought idly, "Gee, what if it hit the Earth?".

And I though, "No, the Moon would get in the way" (see article about gravitational ejection). "What if it hit the Moon?"

"What if it IS the Moon?" I immediately conjured up images of Caloris basin on Mercury, Neptune's strange, backwards orbiting moon Triton, and Pluto. Quite the most exciting discovery of my life. And, of course, other peole had already though of this.

I KNOW Pluto is not a planet. It came from the Sun/Neptune L4 or L5 point. That would make it a second-order moon of Neptune, as per the article. L4 and L5 stability zones touch the Hill sphere and this is not a coincidence.

This work is all well and good, but many of these temporary moons can be predicted and found. I'm referring, of course, to the SIV-B stages of the apollo missions as well as several spent final stages of interplanetary spacecraft. They all have earth's orbit as a perihelion or aphelion position, and I believe at least one has been found.

The catch and release nearby meteoroids is referred to as "sport mooning."

In Camille Carlisle's otherwise excellent article, she comments that it is 'weird' that the Earth is closest to the Sun in January. It WOULD be weird if the Earth-Sun distance had a major influence on the seasons, but that is, of course, not the case. While the comment is likely to have been made in jest, I feel that it's perhaps best that Sky and Telescope - which commands a great deal of respect - should avoid publishing such comments.

Having said that, keep up the great work ! Camille and the entire team writing the news page articles are doing a great job.

The animation on the jpl website, which you link to in the article, really helped me understand the interactions of Earth, Moon, and moonlet. And Martin, happy perihelion. I hope we're all wearing our Hawai'ian shirts and sandals in honor of the fact that we're as close to the Sun as we get all year. 😉

The animation on the jpl website, which you link to in the article, really helped me understand the interactions of Earth, Moon, and moonlet. And Martin, happy perihelion. I hope we're all wearing our Hawai'ian shirts and sandals in honor of the fact that we're as close to the Sun as we get all year. 😉