On April 25th, NASA's Swift satellite detected the brightest extrasolar stellar flare ever seen — from a nearby star only about one third the Sun's size. The star, EV Lacertae, is normally 10th magnitude (40 times too faint to see by eye), but the flare would have made the star visible had EV Lac been well positioned in the night sky at the time. 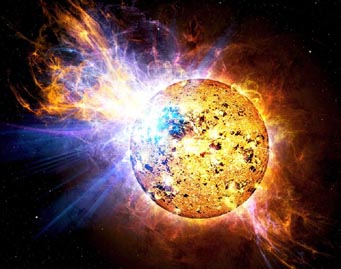 Last month an incredibly powerful flare erupted from the surface of the red-dwarf star EV Lacertae, as shown in this NASA depiction.

EV Lac is one of our closest stellar neighbors, lying 16 light-years away. But as a red dwarf (which comprise roughly 75% of the stellar population), this star is much cooler and smaller than the Sun, which is why it appears so dim.

So why did it produce such a prodigious flare? EV Lac is relatively young at 300 million years, and younger stars are more active as a rule. It also spins around in just four days, and this high-speed rotation contributes to a powerful magnetic field 100 times the strength of the Sun's.

Scientists believe that flares occur when high-energy material entangled in a star's magnetic fields breaks free. Magnetic-field interactions also lead to starspots, surface regions slightly cooler than their surroundings, and EV Lac boasts quite a few — a hint that strong magnetic fields dominate more than half of its surface.

Launched in 2004, Swift hunts primarily for gamma-ray bursts, enigmatic explosions more powerful than any other outburst seen in the universe, but its instruments make it useful in studying stellar flares as well. Only with high-energy telescopes can scientists study the phenomenal plasma temperatures produced by flares.

Swift's X-ray telescope has both imaging and spectral capabilities, and the overpowering brightness of EV Lac's outburst allowed the satellite to measure the flare in detail. "This gives us a golden opportunity to study a stellar flare on a second-by-second basis to see how it evolved," said Stephen Drake of NASA-Goddard, according to a press release from the space agency.

Scientists hope that flares such as EV Lac's will give us a better idea of the Sun's early history (when our star spun faster and was more energetic) and of the nature of stellar flares in general.


That person who keeps asking if it is in Seattle

What is its magnitude?