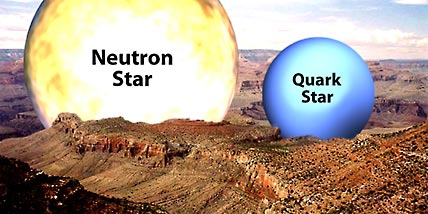 The sizes of a neutron star and a quark star compared to the Grand Canyon. The smallest, most massive, most compressed neutron star possible is about 17 kilometers in diameter. A quark star can be smaller than 11 kilometers diameter. The canyon is 29 kilometers from rim to rim. In reality this scene couldn't exist; the entire Earth would collapse almost instantly to a thin layer coating the surface of either superdense star.

Astronomers say they have likely found a bizarre new type of superdense star made of a weird form of matter like nothing else in the universe.

Two teams using the Chandra X-ray Observatory and the Hubble Space Telescope independently studied two objects that seemed, at first, to be ordinary neutron stars. On closer look, however, each showed evidence of being an even smaller, denser object called a quark star or strange star. "If this is the case, astronomers have provided evidence for a new state of matter," said Michael Turner (University of Chicago) at a NASA press conference yesterday. The discovery indicates ways "the universe can be used as a laboratory to explore nature in ways we simply cannot do on Earth."

A neutron star, bizarre and extreme as it is, consists mostly of a sea of neutrons, particles familiar to physicists on Earth. The neutrons — the remains of crushed atomic nuclei — are packed so densely that a teaspoonful of neutron-star matter typically has a mass of about a billion tons. Theorists have speculated since the 1980s that if a neutron star gained enough mass, the pressure at its core might grow great enough to crush even neutrons themselves into their constituent particles, called quarks.

Such stars would go well beyond the reach of Earthly physics. While physicists certainly believe that quarks exist, not one quark has ever been observed by itself. Theory says that quarks normally cling together too tightly to appear as individuals. They clump into threes to form neutrons and protons, which in turn make up atomic nuclei and therefore all the chemical elements. Earth-bound labs can't generate enough energy to create free quarks — which would be an entirely new form of matter.

The quark soup of a strange-matter star might have truly abnormal properties. Unlike ordinary neutron-star material, once it's formed it might hold together in its superdense state without gravity's help. If so, a disrupted strange star could litter space with tiny but massive shards called "quark nuggets" or "strangelets." These bits would have a disturbing quality: they might convert anything they touch into strange matter too, including any star or planet they happen to fall into.

The two groups announcing their findings turned up the two possible strange stars by different means.

David Helfand (Columbia University) and his colleagues found a putative neutron star, 3C58 in Cassiopeia, that seems unreasonably cool. It is presumably the remnant core of a supernova that Chinese astronomers saw exploding in the year 1181. Its X-ray emissions indicate that it has a surface temperature of about 1 million degrees Celsius — pretty hot, but only half the temperature expected for a neutron star so young. A strange-matter star, however, could cool quickly enough early in its life, Helfand said. His team's findings will appear in Astrophysical Journal Letters. 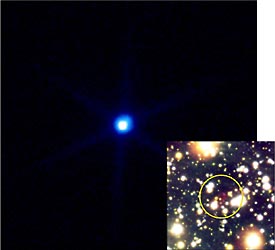 The superdense star RX J1858–3754, located 400 light-years away in Corona Australis, shines fiercely in X-rays. It seems to be 700,000° Celsius and only 11 kilometers in diameter. Inset: The star is practically invisible at optical wavelengths, as shown in this deep image from one of the European Southern Observatory's 8.2-meter reflectors.

Jeremy Drake (Harvard-Smithsonian Center for Astrophysics) and colleagues imaged a different putative neutron star, RX J1856–3754 in Corona Australis, at both X-ray and visible wavelengths using Chandra and Hubble. They found that it radiates like a body with a temperature of 700,000 degrees Celsius and a diameter of only 11 kilometers (7 miles). That is too small to fit models of neutron stars, which should range in size down to no smaller than about 17 kilometers diameter. However, RX J1856–3754 is right in the middle of the theoretical size range for strange stars. The astronomers caution that they might just be seeing a hot spot on an ordinary neutron star, though this would require unlikely coincidences.

Strange stars are so called not because they're weird (though they are) but because the extraordinary pressures within them should turn some of their constituent quarks into a heavy type of quark named "strange." Neutrons and protons are made of two lighter types called "up" and "down." (The names were chosen whimsically and have no particular meaning.)

"It's possible that all the stars we have been calling neutron stars are in fact strange stars" or hybrids of the two, said Turner. If strange matter does convert everything it touches into more strange matter, these stars would consist of the stuff right up to their perfectly hard-edged surfaces, with nothing but vacuum above. If it doesn't, the stars could be hybrids with strange-matter cores and neutron-star outer layers.