Last week the American Astronomical Society (AAS) announced that R. Jay GaBany, a product manager for internet-based companies from San Jose, California, is the 2011 winner of the Society’s Chambliss Amateur Achievement Award. The award is given annually to an amateur astronomer from North America who makes outstanding contributions to scientific research. 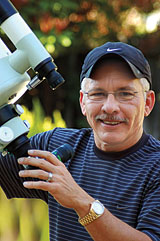 Using a 20-inch telescope at his remote Black Bird Observatory in New Mexico, GaBany has been one of the world’s leading amateur astrophotographers for the past decade. But his contributions go far beyond just taking pretty pictures. In recent years, GaBany has devoted hundreds of hours to work with a team of astronomers led by David Martinez-Delgado of the Max Planck Institute for Astronomy in Germany to take deep CCD images of galaxies far beyond our Local Group.

GaBany’s images have revealed faint tidal streams and rings in the outer halos of large spiral galaxies, indicative of recent and ongoing gravitational interactions with dwarf satellite galaxies. These images are helping scientists better understand how large galaxies such as our own Milky Way are built up through the collisions and mergers of many smaller galaxies.

Observing under very dark skies, and using very sensitive cameras, long exposure times, and advanced imaging and processing techniques, GaBany has managed to capture details not seen in professional images. Papers based on GaBany’s images have been published in leading scientific journals such as the Astrophysical Journal, the Astronomical Journal, and Astronomy & Astrophysics, with GaBany being listed as coauthor.

“It has been an amazing adventure that, thankfully, has not ended,” says GaBany. “I never dreamed that Dr. Martinez-Delgado’s invitation to participate in his research group would result in a multi-year relationship and transport me on a modern day voyage of discovery. While professionals and amateurs commonly collaborate on planetary research, I realize such associations involving astrophysicists are rare. It’s a great honor to receive the AAS’s Chambliss Award.” 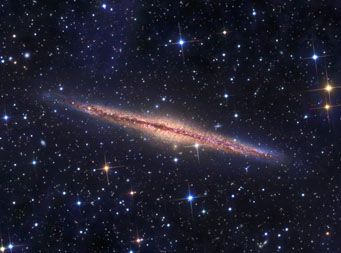 An extraordinarily deep image of spiral galaxy NGC 891captured by GaBany from his new Black Bird II Observatory. Click above to enlarge.

“I came to know Jay in March 2006 when I chanced upon his website of astrophotos and was struck by an image of the galaxy M94 that displayed never-before-seen structure in the faint outer halo surrounding the galaxy,” recalls Martinez-Delgado. “I quickly realized he possessed enthusiasm, time, talent, and research-grade instruments that could be beneficial to my projects. So I invited him to join my team of professional researchers. He accepted, and we have been working together ever since in what has proven to be an extremely fruitful example of professional-amateur collaboration.”

Galaxy researcher Steven Majewski of the University of Virginia adds, “I can think of no one more deserving of such recognition than Jay, who has single-handedly, through his dedicated and careful work, spawned a new research direction in the exploration of galaxy evolution. His images of the galaxies NGC 5907 and NGC 4013 absolutely blow away the previous professional attempts (including the efforts of my research group), and reveal complex, multi-wrapped tidal streams around these disk galaxies.” 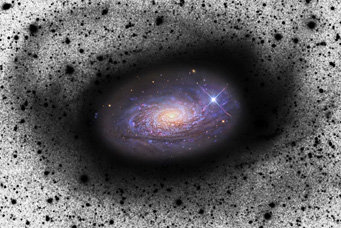 “I am very excited by Jay GaBany’s selection as the winner of the Chambliss Award for Amateur Achievement,” adds Vassar College astronomer Debra Elmegreen, president of the AAS. “Amateurs are increasingly playing more and more prominent roles in aiding and collaborating with professional astronomers in research. Mr. GaBany's work crosses the line from amateur into professional research; his techniques to enhance faint features are quite sophisticated, and his deep images of the outer parts of galaxies are not just pretty pictures but have changed the way we see galaxies and helped guide our thinking about the connections between galaxies.”

To learn more about GaBany’s work, and to see many of his images, visit his website: www.cosmotography.com. An article by Dr. Martinez-Delgado and Jay GaBany appears in the January 2009 issue of Sky & Telescope magazine.