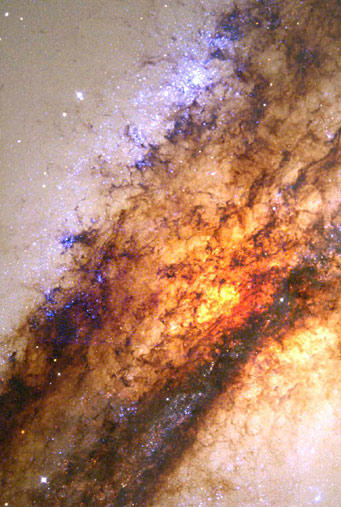 The bright core of the active galaxy NGC 5128 glares right through thick dust lanes, as shown in in this Hubble Space Telescope image. This galaxy's active nucleus is apparently the closest source of ultra-high-energy cosmic rays. Click image for full-resolution views.

It may be the next best thing to touching a black hole: catching super-energetic particles that the hole has accelerated to fantastic energies. It's now happening every few weeks at the Pampa Amarilla in central Argentina. As a result, one of the biggest mysteries in astrophysics has apparently just been solved.

According to a paper in the November 9th issue of Science, the most energetic particles in the universe, now being recorded by the Pierre Auger Cosmic Ray Observatory, come from zones of the sky rich in active galactic nuclei (AGNs), which are powered by supermassive black holes.

Cosmic rays are not rays at all. They are atomic nuclei, mainly protons, whipped up to practically light-speed. Some are produced by flares on the Sun, others by magnetic processes in the shock fronts of supernova remnants in our galaxy. But the source of the most energetic ones — those carrying a punch of 1018 or even 1020 electron volts (eV) — has been a mystery for almost 45 years. A single such particle carries as much kinetic energy as a well-served tennis ball. Part of why they’ve been so hard to study is because they're extremely rare. On average, a square kilometer at the top of Earth’s atmosphere is hit by an ultra-high-energy cosmic ray particle (UHECR) only once per century (Sky & Telescope: March 2003, page 32).

Enter the $54-million Pierre Auger Observatory (pronounced Au-zhay), which is nearing completion on the Argentine pampas. Dreamed up by Nobel physicist James W. Cronin (University of Chicago), it covers 3,000 square kilometers — enough to catch a UHECR every two weeks or so. Twenty-four segmented telescopes scan the skies for faint streaks of ultraviolet fluorescence, produced when nitrogen atoms are ionized by a cosmic ray event. Meanwhile, 1,600 ground-level detectors — tanks filled with purefied water — detect the "air showers" of secondary particles spawned when a high-energy cosmic ray hits an atom at the top of the atmosphere.

The observatory started taking scientific data in January 2004 with just 750 ground detectors. Since then it has recorded about a million air showers, most of them produced by low-energy cosmic rays. But 27 events were generated by particles with energies over 5.7 × 1019 eV. By combining the data from the various Pierre Auger detectors, the direction of origin of these UHECRs could be at last be established. (Unlike lower-energy cosmic rays, such forceful particles are deflected hardly at all by interstellar magnetic fields.)

The Pierre Auger collaboration — more than 370 scientists from 90 institutes in 17 countries — reports in Science that these cosmic tennis balls do not come from random points on the sky. Instead, their arrival directions appear to match the distribtion of active galaxies within a few hundred million light-years of us, and in particular NGC 5128 (Centaurus A) only 12 million light-years away. "This is a fundamental discovery," said Cronin in a press release.

Astrophysicist Peter Biermann (Max Planck Institute for Radio Astronomy, Germany) says he feels "happily vindicated" by the Pierre Auger result. "When I first proposed that UHECRs are produced by nearby AGNs, people were rather sceptical," he told Sky & Telescope. "Over time, this idea has become the leading contender. It’s quite amazing that is has now been proved right." But Biermann admits that more data are needed to firm up the result.

According to astrophysicist Heino Falcke (University of Nijmegen, the Netherlands), a new addition to Pierre Auger may soon increase the observatory’s efficiency and angular resolution. Falcke and his colleagues are constructing a network of radio receivers that will track synchrotron radiation emitted by air-shower electrons. "Radio operates on 24/7 basis," says Falcke, "while fluorescence detectors can only be used during clear, moonless nights."

Next year, a funding decision will be made on a second cosmic-ray observatory in Colorado. "Pierre Auger North" may be even bigger than its southern sibling. Moreover it will be able to observe the giant elliptical galaxy M87 (Virgo A), in the relatively nearby Virgo Cluster at declination 12° north. M87 is the nearest AGN of its size and power.

Biermann is quite confident that the current result will stand the test of time. "Hopefully, we will also be able to sort out the physics" of the acceleration process, he adds. Says Pierre Auger spokesperson Alan Watson (University of Leeds, UK): "Cosmic ray astronomy has begun."

Contributing editor Govert Schilling’s hometown, Amersfoort in the Netherlands, is hit by an ultra-high-energy cosmic ray air shower about once every year and a half.

People deserve very good life and loans or auto loan will make it better. Just because people's freedom is based on money.

People deserve very good life and loans or auto loan will make it better. Just because people's freedom is based on money.