Weary scientists are returning from the bleak and barren Antarctic Plateau, where they endured some of the harshest conditions on Earth — all in the name of astronomy. They've installed a first-of-its-kind, fully automated observatory to prove that Dome Argus ("Dome A"), the plateau's highest point, is the finest observing site on Earth. 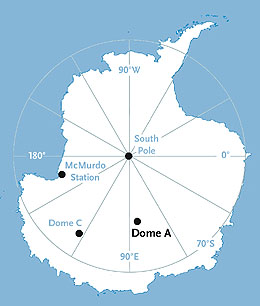 Dome Argus ("Dome A"), 13,400 feet above sea level, marks the highest part of the Antarctic Plateau.

The robotic installation, dubbed Plateau Observatory (Plato for short), sits atop the ice sheet 13,400 feet (4.1 km) above sea level. Midwinter temperatures there can plummet to –120°F. "It is the coldest and driest place on Earth," noted team member and astrophysicist Lifan Wang (Texas A&M University, Chinese Center for Antarctic Astronomy) in a press release.

The location's high elevation and near absence of wind means that the new telescopes from Australia, China, and the US will operate virtually free of the turbulent atmosphere, thick with water vapor, that plagues observers elsewhere. "These conditions are expected to allow ground-based observations that would otherwise not be possible except form expensive airborne and space telescopes," says astronomer and team member Craig Kulesa (University of Arizona). 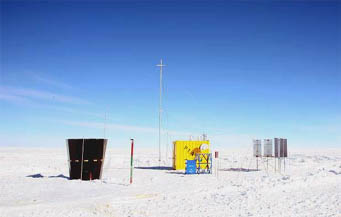 Here's how Dome A looked as Plato's installation team prepared to leave. Its solar panels sit nearby and the power module (not pictured) lies farther off, so any exhaust doesn't interfere with observing.

Built by the University of New South Wales in Australia, Plato consists of two large, well-insulated steel boxes. The instrument module, bright yellow against the stark blue and white landscape, keeps seven telescopes and their electronics relatively warm at 0°F. Other sensors keep tabs on the temperature, wind, humidity, and cloud cover.

About 50 yards away is its bright green counterpart, which houses six small diesel engines that power the observatory once the Sun disappears for four months at the end of March. When the Sun's up, solar panels teetering on stilts above the snow augment the needed electricity. Plato and its equipment is designed to be completely automated for a year.

Four 6-inch optical telescopes from China make up the C-Star instrument, which will monitor large regions of the sky for transient events. Two cameras from Caltech make up the Gattini instrument, which will measure sky's brightness and aurora. A radio telescope dubbed Pre-HEAT from the University of Arizona and the University of Exeter will observe at submillimeter wavelengths to measure water vapor in the air and glimpse interstellar clouds. Both Gattini and Pre-HEAT were funded in part by the National Science Foundation.

"Many of these telescopes are pathfinders for future Antarctic ventures," says Kulesa. For example, Pre-HEAT is a precursor to the larger, 20-inch, High Elevation Antarctic Terahertz telescope (HEAT), which Kulesa and others are planning to make for Plato. They hope it will be the first to see the birth of interstellar clouds, the observations of which may give us insight into the origins of the universe.

Led by the Polar Research Institute of China (PRIC), a 17-member installation team traveled in November from Shanghai to Australia, where they picked up Plato before sailing for 2½ weeks to Antarctica. Then they hauled the two modules (total mass: 7 tons!) for three weeks to Dome A, arriving January 11th. Some 800 miles from the coast and 600 miles from the US-operated Amundsen-Scott South Pole Station, the remote site has only been visited once before — by a PRIC team in 2004, to install an automated weather station.

This winter's observations will be a component of the International Polar Year. However, Chinese astronomers have bigger plans for the Dome A site. They plan to spend more than $25 million over the next few years to create a permanent station there.

Just simple question: diesel generators for powering in such preciuos place? Why not hydrogen cells? They are clean but not so cheap - we all know that. However, if such amount of funding was invested in this Dome at the End of The Earth, it's worth to keep this one of our last Earth Ends as clean as we can.

Does Diesel fuel remain liquid at such cold temperatures?

Maybe they're burning ethanol instead of Diesel oil....

Yes diesel remains liquid, and would have a negligible impact on the environment.

For the unaided human senses - yes, there is no visible and sensible impact - I agree. But tell me - would you like to make a cup of tea based on water based on some melted ice or snow from around this diesel engine? I believe you'd not.

Too bad the article does not give more numbers. Like what is the median seeing, how many clear nights (observable nights) per year, etc... For submillimeter observatory it's one thing, for visible light telescopes, it's likely that one gets like 3 months of dark sky, out of which half is clouded out... So 90 nights per year is not "the best site in the world", even if the seeing is very good.