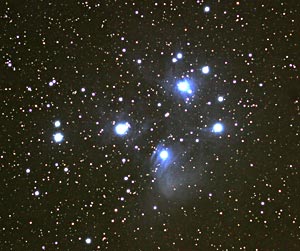 One of the night sky's most familiar sights, the Pleiades star cluster sits center stage in debates over distance measurements by the Hipparcos astrometric satellite.

So successful was the European Space Agency’s Hipparcos astrometric mission of 1989–93 that it has affected every branch of astronomy. With unprecedented accuracy, the spacecraft gauged the positions, motions, and parallaxes (distances) of 118,218 stars — grist for a host of new findings about stellar dynamics and in particular the cosmic distance scale, key to everything in astronomy beyond the solar system. But that wasn't the end. The University of Cambridge has just issued Hipparcos, the New Reduction of the Raw Data, a 449-page book with accompanying DVD (Springer, 2007).

Were the original Hipparcos results, announced at a celebratory conference in Venice in May 1997, flawed in a serious way? Do the legions of astronomers whose research has benefited from Hipparcos now have to do their work again?

Questions like these motivated the 10-year effort by University of Cambridge astronomer Floor van Leeuwen. Not only was he a member of the Hipparcos Science Team, intimately familiar with the original analysis, but computers have improved so much that many small effects — unappreciated at the time, or neglected out of necessity — could be factored in. These include microscopic jogs in the spacecraft's orientation due to micrometeoroid impacts, as well as micron-scale changes in its geometry each time it dipped into Earth’s shadow and emerged into warm sunlight.

It turns out that van Leeuwen’s new computation doesn't alter the Hipparcos results significantly for most stars. But it does refine the original numbers, dramatically shrinking their uncertainties — typically to just a half or a third of what they were before.

For instance, the distance to Polaris (a key star because it's the nearest Cepheid variable and thus a steppingstone to the distances of other galaxies) goes from 431 ± 30 light-years to 432 ± 7. And Deneb, originally pegged at 3,200 light-years but with an uncertainty that could put it almost anywhere, moves to 1,410 ± 230 light-years. For nearer stars the changes are generally much smaller.

And then there’s the Pleiades.

Even in 1997, a few astronomers voiced surprise and skepticism at Hipparcos’s distances to certain open star clusters. The Pleiades came out 390 light-years away, give or take 10, which just didn’t jibe with a long line of prior research setting the cluster at 420 to 440 light-years.

Had something gone awry with the original analysis? If so, it would cast doubt not only on the Pleiades but on everything else. After all, the Hipparcos team had to solve simultaneously for the positions, motions, and distances of 118,000 stars — a problem so vast and untried that ESA set two teams of mathematicians to work on it independently, so they could devise their own methods and check their results against each other.

Within a few years other astronomers joined the doubters' ranks. In 2004, a team led by Xiaopei Pan and Michael Shao (Jet Propulsion Laboratory) reported their interferometric measurements of the binary star Atlas, the second-brightest star in the Pleiades, which pointed to a distance of 440 ± 7 light-years with a “firm lower bound” of 414 light-years. Then a group under David R. Soderblom (Space Telescope Science Institute) used the Hubble Space Telescope to measure the parallax of three cool dwarfs in the Pleiades; they got 439 ± 10 light-years. Both groups declared that Hipparcos’s Pleiades distance (roughly 10% smaller) had to be wrong.

But van Leeuwen is quick to point out that Pan’s team studied a single star and the HST people just three, whereas he's been able to pool the values for 54 Pleiades members spread across 9° on the sky. Moreover, HST’s parallaxes are “relative,” meaning they’re derived differentially against background stars within a small field, while Hipparcos’s parallaxes are “absolute,” the outcome of a global solution over the whole sky.

With his new Pleiades distance of 399 ± 6 light-years, van Leeuwen throws down the gauntlet: “I think it is now up to the other parties involved to do as critical an investigation on their data, reduction methods, and assumptions, etc., in particular where it concerns main-sequence-fitting methods and differential parallax determinations in a single, small field.”

The fight isn’t over, perhaps, but the battle lines are more clearly drawn.