After years of anticipation, the crew of Space Shuttle Atlantis lifted off Monday afternoon, May 11th, for an 11-day mission, the fifth and last slated to service and repair the Hubble Space Telescope. The multi-part fixup should improve Hubble's capabilities and extend its lifespan by at least five more years. 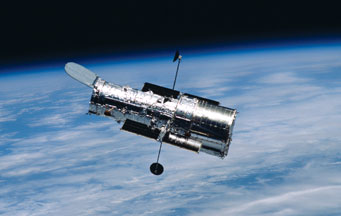 The Hubble Space Telescope floats away from the Space Shuttle Columbia after the last Hubble servicing mission in March 2002.

The seven astronauts have five challenging spacewalks scheduled. They plan to install two new science instruments on Hubble and replace all six of its gyroscopes, a fine-guidance sensor, and the telescope's rechargable batteries. They will also repair two other science instruments: the Advanced Camera for Surveys (ACS) and the Space Telescope Imaging Spectrograph (STIS). These instruments were not designed for in-flight servicing, and no spacewalk repairs this challenging have ever been undertaken before.

The Wide Field and Planetary Camera 2 (WFPC2), a 15-year veteran aboard Hubble, will be replaced with its successor, the Wide Field Camera 3 (WFC3). The new instrument should offer much better sensitivity (due to advances in detector technology) while covering a wider range of wavelengths from the ultraviolet to the near-infrared. 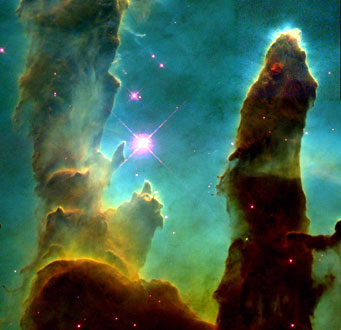 The Pillars of Creation in Messier 16, the Eagle Nebula, may be the Hubble Space Telescope''s best-known (and most beautiful) photo.

WFPC2 is now the oldest instrument on board Hubble and was responsible for many of the telescope's most iconic images. “The WFPC2 image I remember most is of the Eagle Nebula,” said Ed Weiler, acting assistant administrator for NASA’s Science Mission Directorate in Washington. “It has these pillars of gas and dust that are trillions of miles long. You know there are new stars and planets being formed in there, and the colors are just so intriguing. But what really got me was not my reaction to the picture, but the reaction of the American public.” WFPC2’s credits also include the Hubble Deep Field images: the telescope stared at a single patch of dark sky over 10 days and came away with the deepest-ever picture of the "cosmic wallpaper" of extremely distant galaxies.

The new WFC3 not only looks like the original WFPC and the veteran WFPC2, but its housing, radiator, and other components came from the original WFPC, which was returned to Earth after the first Hubble servicing mission.

The Cosmic Origins Spectrograph (COS), in contrast, is completely new. It is designed to study distant star formation and the large-scale "cosmic web" structure of the cosmos.

“The far-UV detector is similar to what we built for NASA’s FUSE mission, but with better resolution and much better sensitivity,” said Oswald H. W. Siegmund, lead scientist at the Space Sciences Laboratory, which built the detector under the leadership of James Green (University of Colorado at Boulder). Light passing through intergalactic gas in the cosmic web should reveal — at many different redshifts between the light source and us — the spectral “fingerprints” of hydrogen, helium, and heavier elements. This will allow scientists to build up a picture of how intergalactic matter is distributed in three dimensions and how it has changed over time as the universe has expanded and aged.

Atlantis’s rendezvous with Hubble is officially designated SM4, Servicing Mission 4, despite being the fifth (because SM3 required two flights). It has been plagued with delays. The mission was originally scheduled for 2002 but got bumped to 2004. Then it was abandoned in the aftermath of the Columbia disaster as being potentially too dangerous to the astronauts. Doing the work with robots instead was considered but found not to be feasible. The mission was put back on the roster in 2006 and was scheduled for October 2008. But 17 days before it was to launch, Hubble's Science Instrument Command and Data Handling Unit malfunctioned, and the mission was again delayed to plan a swap-out of this unit too. For many of us, it's hard to believe that the repair mission is finally under way!

In December, incidentally, the 19-year-old telescope broke the record for the longest continuous run of observations from orbit. The previous record-holder was the little International Ultraviolet Explorer, an ESA/ NASA/ UK project that far outlasted its design lifetime.

The shuttle crew will use an IMAX camera to film the spacewalks for an upcoming Warner Bros. film.

More details can be found at NASA's space shuttle and Hubble news pages. More about the planned mission is last October's Sky & Telescope.

Valerie Daum is an intern at Sky & Telescope.

Because the corrective optics needed to compensate for Hubble's spherical aberration are now built into the instruments used in Hubble, thus making COSTAR unnecessary, Hubble will be loaded with more cutting-edge imaging and spectroscopic technology that ever before. This is an exciting time in our history. Hubble with its new upgrades will be able to do science that is unprecedented in the entire history of astronomy. The next few years should prove to be a remarkable time for researchers, revealing new insights into the nature of our universe.

It looks like the ability to service Hubble has greatly improved the telescope's utility for astronomers over the term of its life. This ability should be in each future space telescope. The benefits far outweigh the costs, in a manner that can sometimes not be foreseen.