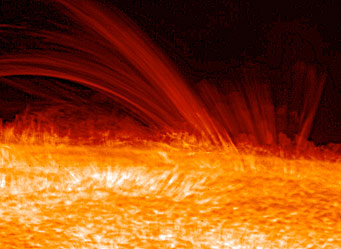 Fine-scale structure pervades the Sun's chromosphere, the layer above the normally visible surface or photosphere. Here, small prominences extend from the chromosphere up into the lower corona. The rich structures results from the hot, ionized gas interacting with the Sun's magnetic field. Click image for larger view.


Hinode / JAXA / NASA
Since its launch in September 2006, Japan’s Hinode (“Sunrise”) spacecraft has been taking some of the highest-resolution pictures and movies ever made of the Sun. This imagery, and other data from the spacecraft, are giving new insights into the processes that heat the Sun’s corona and that launch the solar wind: the thin, fast, variable outflow of gas that spreads throughout the solar system. The solar wind continually buffets Earth’s magnetic field, causing many effects on and around our planet. Today's Hinode results indicate that long-sought magnetic waves originating near the Sun’s surface may play an important role both in driving the solar wind and in heating the corona.

Slow Steps to the Sharpest Images

Astronomers have studied surface features on the Sun ever since Fabricius, Galileo, and Scheiner discovered sunspots in 1611. But Earth’s shimmering daytime atmosphere long foiled attempts to see fine detail. Furthermore, NASA made a decision decades ago, when planning missions to study the Sun from space, to concentrate on covering wavelengths outside the visible range rather than obtaining the sharpest detail. In fact, soon after the debacle with the wrongly shaped mirror of the Hubble Space Telescope in 1990, NASA cancelled its High Resolution Solar Observatory, whose mirror was to be made at the same optical fabricator as Hubble’s.

Even the Solar and Heliospheric Observatory (SOHO), launched by the European Space Agency in December 1995 and still in operation, doesn’t carry high-resolution imagers. In terms of sharpness, its Extreme-Ultraviolet Imaging Telescope doesn’t match the best ground-based imagery, which has a resolution of a fraction of an arcsecond. 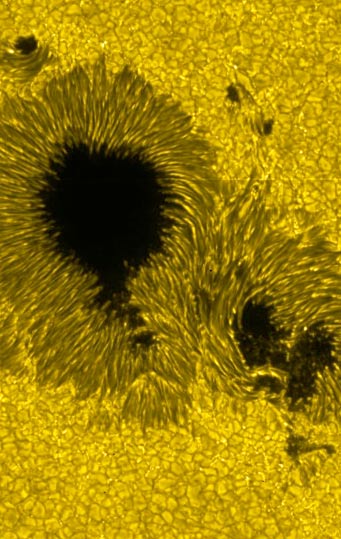 Sunspots, their filamentary penumbrae, and solar granulation are sharply resolved in images like this one from Hinode's Solar Optical Telescope. Click image for larger view.

NASA’s Transition Region and Coronal Explorer (TRACE) spacecraft, launched in April 1998, provides pixels 1/4 arcsecond wide, giving a quoted resolution of twice that, or 1/2 arcsecond — about twice as sharp as normal “good seeing” from ground-based telescopes and certainly much steadier. (One arcsec equals 460 miles, or 750 km, at the Sun’s distance.) TRACE’s time-lapse movies, covering about 1/6 of the Sun at a time, do reveal small solar features and motions with unprecedented consistency, sometimes resolving narrow threads in previously blurred-out structures.

Ground-based astronomers had used high-altitude telescopes like the Sacramento Peak Observatory in New Mexico to catch short runs of especially good seeing, as well as lakeside (or lake-island) sites like the Big Bear Solar Observatory in the San Bernardino mountains of southern California to get long series of images at good resolution. More recently the Swedish 1-meter Solar Telescope, on La Palma in Spain’s Canary Islands, used its high altitude, vacuum telescope tube, and advanced imaging-processing techniques to make the sharpest Sun pictures ever.

Hinode (formerly known as Solar-B) is finally approaching the resolution record set by the best ground-based telescopes, though its main advantage is long runs of data of consistently high quality. The satellite carries three telescopes, two of them American-built. American scientists also participate by analyzing the magnificent data that is now being received.

For the last year we’ve remained at “solar minimum” in the Sun’s 11-year activity cycle. For most days this past month, for instance, the Sun has appeared completely blank, with an official sunspot number of 0. So scientists using Hinode have been able to get a good grasp on the underlying “quiet” Sun. They present nine research reports in tomorrow’s issue of Science (December 7, 2007). 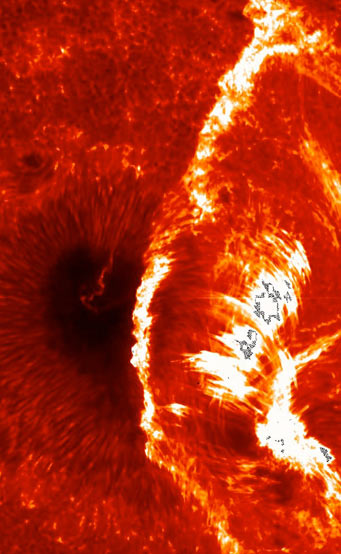 Shortly after Hinode took the sunspot image at the top of this page, it caught a powerful solar flare exploding across the scene. The bright part of a flare marks the "footprint" of a magnetic field that channels suddenly-released energy from the inner corona down to the surface. This flare produced a blast of high-energy protons that reached Earth. Click image for larger view.

Those of us who specialize in the Sun have written all our lives about the persistent problem of why the solar corona (outermost atmosphere) is millions of degrees hot even though it surrounds a photosphere (solar surface) of “only” 5,780 kelvins. “The heating processes that generate and sustain the hot corona have so far defied quantitative understanding,” write Robertus Erdélyi and Viktor Fedun (University of Sheffield, UK) in their introduction to the suite of papers, “despite efforts spanning more than half a century.” Many of the reports (online for subscribers at www.sciencemag.org) use data from Hinode’s optical and X-ray telescopes to test one or another coronal-heating idea. (The third telescope has a spectrometer that images in the extreme ultraviolet, though none of its data were reported.)

Bart de Pontieu (Lockheed Martin Solar and Astrophysics Laboratory; LMSAL) and colleagues report on observations by Hinode’s Solar Optical Telescope (SOT). Physicists have long thought a certain type of wave in the Sun’s magnetic field, known as Alfvén waves, might heat the corona, though ground-based evidence against this idea was reported last August. The Hinode researchers announce that they have directly observed such waves in the lower solar atmosphere for the first time, and have measured the rate at which they carry energy upward. They find that the waves have sufficient energy to launch the solar wind outward through the solar system.

These observations were made possible by Hinode’s high resolution (0.2 arcsecond) and high time resolution (movies with 5 seconds between frames). The high spatial resolution separates overlapping chromospheric spicules (numerous small jets) better than normally possible before, though my own group is analyzing ground-based data from the Swedish 1-meter Solar Telescope with similar resolution obtained by using new computer restoration techniques.

Takenori J. Okamoto and American and Japanese colleagues used SOT to observe an active-region prominence, a rare event just now at solar minimum. They saw oscillations of fine-scale structures, which they suggest are caused by Alfvén waves leading to coronal heating.

Jonathan Cirtain (NASA’s Marshall Space Flight Center) is first author on a paper showing a different type of energy creation and flow. This group, which includes scientists from the Smithsonian Astrophysical Observatory, reports on observations of magnetic reconnection — the explosive energy release that occurs when adjacent magnetic fields connect and snap into a new configuration, like released rubber bands. The group finds many more X-ray jets from such events in the Sun’s atmosphere than had previously been reported, making these into major contributors to the solar wind.

Similarly, Kazunari Shibata, with colleagues from Japan and LMSAL, used Hinode’s Solar Optical Telescope to discover small, frequent jets that verify important, traditional ideas of magnetic reconnection laid down years ago by Eugene Parker of the University of Chicago. They suggest that the ubiquity of the jets they find — upside-down-Y-shaped, and known as “anemone jets” — shows the importance of magnetic reconnection throughout the solar atmosphere, which favors the idea that this is an important part of coronal heating.

Fabio Reale from Italy and colleagues from Italy, Belgium, the US, and Japan use the same telescope to map temperatures at high resolution. Taro Sakao and colleagues from Japan and the US use the XRT to show the outflow of hot plasmas along open magnetic field lines into the upper corona, providing one source of the solar wind itself.

Yukio Katsukawa and colleagues from Japan and LMSAL find microjets in sunspot penumbrae. And Guillaume Aulanier from France with Smithsonian and Japanese colleagues find a new mode of magnetic reconnection, in which field lines slip across each other instead of breaking and reconnecting instantaneously.

Finally in the suite of reports, Kiyoshi Ichimoto and Japanese and American colleagues find twisting motions in the dark filaments that make up sunspot penumbrae. Some of the motion is real, while part may come from changes in these narrow objects’ surfaces of visibility rather than motions of the objects themselves. Here, too, signs of oscillations are seen, with periods of 3 to 5 minutes, typical of previously known oscillations in the solar surface.

So the Hinode results so far, taken together, find direct evidence for strong Alfvén waves in the magnetic field and for abrupt magnetic reconnection, both of which can contribute to heating the solar corona. Further, the observations show processes that can explain the formation of the solar wind, which carries the corona out to the Earth's orbit and beyond.

Hinode will track further developments on the Sun as the solar-activity cycle picks up and rises to maximum during the next five years or so.

For more information see the American Hinode website and the corresponding Japanese site (in English). All of the Science articles have high-resolution views, and some link to online movies. A video that some Williams College students and I made this summer on “Colors and Motions of the Sun” includes Hinode movies; it’s available for streaming or as a DVD.

Solar researcher Jay M. Pasachoff of Williams College, Williamstown, MA, is coauthor with Leon Golub of Nearest Star: The Surprising Science of Our Sun, and is chair of the International Astronomical Union’s Working Group on Eclipses.

An Annular Eclipse in May