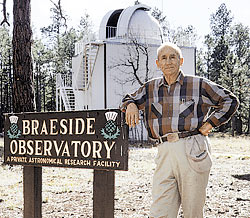 Robert E. Fried, an active variable-star observer and founder of Braeside Observatory, died last November 13th when the private airplane he was piloting crashed about 40 miles north of Phoenix, Arizona. He was 72 years old.

Bob wove two distinct careers together, one as a commercial airline pilot and the other as creator of serious astronomical hardware. He loved both passionately.

In 1976 he established Braeside Observatory in Flagstaff, just a short walk through the pine forest from the US Naval Observatory. It consists of a computer-controlled 16-inch Cassegrain reflector housed inside a 14-foot-diameter aluminum dome converted from a farm silo. Bob had ground and polished the telescope's optics and had the telescope's fork mount machined at Delta Airlines's workshop after office hours. The observatory's control room is curiously reminiscent of an airplane cockpit (see Sky & Telescope's June 1999 issue, page 94).

Bob collaborated with many professional astronomers, including Joseph Patterson of the Center for Backyard Astrophysics, as well as with skilled programmers and technicians. Since 1995, when his homebrewed CCD camera was first added to the Braeside telescope, more than 125,000 magnitude measurements of variable stars had been made. His prodigious output of high-precision photometric data was well known in the professional astronomical community and had resulted in him coauthoring more than 60 technical papers on cataclysmic variables in research journals. He especially enjoyed working with students and teachers both locally and as far away as Lopez Island near the Canadian border.

He was always adamant that the observatory should outlive him. In the summer of 2000 Bob and his wife, Marian, donated the observatory and their adjacent home to Arizona State University's physics and astronomy department. Bob worked earnestly and single-mindedly to gain acceptance into the professional astronomy community. He lived to achieve and enjoy this dream. While he never earned an advanced academic degree nor made his living doing astronomy, it's hard to call him an amateur.

A memorial service for Bob is scheduled to be held at Lowell Observatory on November 25th at 3 p.m.