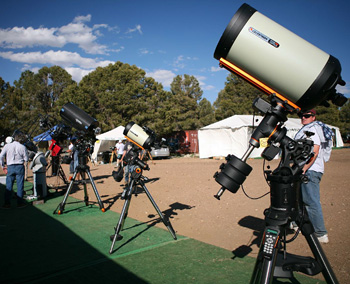 The Riverside Telescope Makers’ Conference (RTMC) Astronomy Expo has been challenged by the elements throughout its 34-year stint at Camp Oakes, a YMCA camp 7600 feet up in Southern California’s picturesque San Bernardino Mountains. Some years have suffered from heat, high winds, and dust, while last year’s attendees braved winter-like conditions with a rare dusting of snow during the annual Memorial Day weekend event. The 2009 gathering featured beautiful weather and excellent nighttime observing conditions — but had to contend with the effects of the current economic climate.

Begun in 1969 as the Telescope Makers’ Conference by the Riverside Astronomical Society’s legendary Clifford Holmes, RTMC has grown into one of astronomy’s premier get-togethers with as many as 1500 attendees enjoying a broad range of presentations, vendors and telescopes by day and dark skies at night. But while overall attendance was noticeably smaller this year — both among astronomers and vendors — RTMC proved its mettle as a gathering of the faithful. Regulars among telescope manufacturers and vendors returned to this essential annual event, and sales were typically brisk as the economic downturn failed to keep astronomers from snapping up the bargains that are always a draw of RTMC. 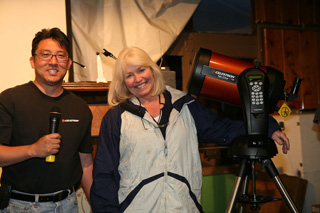 Presentations on wide range of topics were again a feature of the weekend. The Beginner’s Corner and special programs for children addressed the growing number of families that attend RTMC. There seem to be more door prizes for the younger set than for the old-timers these days, and the winners are usually keen amateur astronomers in their own right rather than tagalongs enjoying a weekend of camping with their astronomer parents. Those who fret about the future of the hobby can take heart at the growing number of youngsters who attend — and participate in — this annual event. 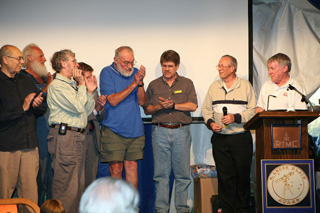 The author, standing at the podium, receives the G Bruce Blair award for outstanding contributions to amateur astronomy.

While the ranks of amateur telescope makers have shrunk since RTMC’s beginnings, there’s still serious competition for Merit Awards. There were only 13 entries this year, but the quality and level of innovation were very high. There was spirited voting for Astronomers’ Choice from among the judging panel’s choices as attendees showed their admiration for the skills of the ATMs and their gratitude that an important part of the hobby was continuing. Reports of the death of amateur telescope making would seem to be premature. There are always plenty of people for whom grinding glass and lovingly turning their vision into delights for the eye — both looking at and through their creations — is too important to let go.

There was also a lot of buzz about RTMC Expo’s new annual partner event, the Pacific Astronomy and Telescope Show (PATS), an autumn gathering in Pasadena launched with great success last year. It’s another opportunity to see what the vendors have to offer without braving the fickle weather. What the economic climate will bring is anyone’s guess but it clearly won’t affect the dedicated astronomy community!

Sky & Telescope is once again proud to be a major sponsor of RTMC Expo and PATS.