Astronomers have found strong evidence that a saltwater ocean lies beneath the icy crust of Enceladus, one of Saturn’s inner moons. By analyzing data collected by NASA’s Cassini spacecraft, which has been orbiting Saturn since 2004, scientists have detected sodium and potassium salts — similar to those in Earth’s oceans — in ice grains near the moon’s surface. 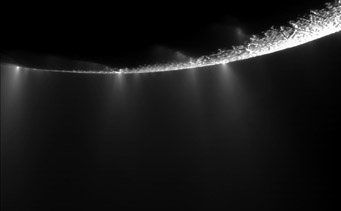 Dramatic plumes, both large and small, spray water ice out from many locations along the famed "tiger stripes" near the south pole of Saturn's moon Enceladus. The tiger stripes are fissures that spray icy particles, water vapor and organic compounds.

Because the material originated from vast plumes of water vapor spouting from “tiger stripes” (prominent surface cracks discovered in 2005), planetary geologists have concluded that large bodies of saltwater must lie under the moon’s icy skin. The findings appear in this week’s issue of Nature.

The spacecraft detected the salts during three close passes in 2008 and 2009, using its cosmic dust analyzer (CDA) instrument. As Cassini flew past, ice grains ejected from the moon’s surface fractures collided with the CDA’s detector at speeds of 4 to 11 miles (7 to 17 km) per second and vaporized. The CDA then analyzed the ingredients of the vapor. “There currently is no plausible way to produce a steady outflow of salt-rich grains from solid ice across all the tiger stripes other than salt water under Enceladus’s icy surface,” says lead author Frank Postberg (Heidelberg University), a member of the Cassini's CDA team.

A closeup of the four 80-mile-long rifts(dubbed "tiger stripes") near Enceladus's south pole (white cross). These are the source of its gas-and-particle plumes. Blue tints in this false-color view from Cassini indicate an icy surface covered with coarse grains and boulders.

Theorists postulate that the water beneath Enceladus’s surface lies against a rocky layer deeper down and dissolves salts and other minerals from it. The salty water then rises through spaces in the ice to form large pools near the surface. If cracks open in the surface ice, the difference in pressure between the water pools and the vacuum of space forces the saltwater out at a rate of 400 pounds (200 kg) of water vapor per second. The resulting geysers are enormous, shooting hundreds of miles into space.

However, some question the conclusion that oceans of liquid saltwater must be producing the enormous geysers. Susan Kieffer, at the University of Illinois at Urbana-Champaign, has argued that the same phenomenon could arise from the disintegration of clathrates, cage-like chemical compounds that can entrap molecules. She and others showed in 2009 that the ratio of ice particles to gas in the geyser plumes was much lower than previously believed. The plumes could arise from the sublimation of the clathrate molecules alone. According to Kieffer, the low ratio of ice to vapor means that there is “no compelling criterion for consideration of a liquid water reservoir.”

But, as Postberg and the CDA team note, "Sublimation of sodium-rich grains would lead to the release of sodium into both the plume’s gas phase and the E ring, which is not observed." 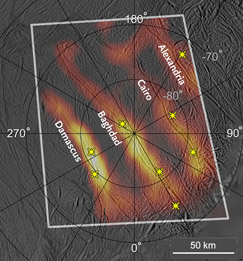 Thermal imaging from the Cassini spacecraft reveals heat escaping along the four sulci (dubbed "tiger stripes") near the south pole of Enceladus. The hottest location, at lower left along Damascus Sulcus, registers -135°F. Yellow stars mark the locations of the moon's dramatic jets.

Another line of Cassini evidence also hints at liquid water beneath the surface of Enceladus. The craft's infrared spectrometer measured the amount of heat emitted from the southern pole of Enceladus, where the plumes are spewing into space. The resulting heat production — 15.8 gigawatts — far exceeds the expected value and is more than enough to keep water liquid deep inside the moon.

Furthermore, the only way for Enceladus to produce heat would be through repeated flexings caused by the tidal pulls of its parent planet, Saturn, and by neighboring moons. Yet if there were no liquid water beneath the moon’s surface — if Enceladus were solid ice throughout — it would be too stiff to flex the required amount. The heat output alone is a telltale sign of liquid water.

The recent Cassini findings hint at a new location in the solar system where life might arise. “This finding is a crucial new piece of evidence showing that environmental conditions favorable to the emergence of life can be sustained on icy bodies orbiting gas-giant planets,” notes Nicolas Altobelli, the European Space Agency's project scientist for the Cassini-Huygens mission.

Raphael Rosen is interning at Sky & Telescope for the summer.